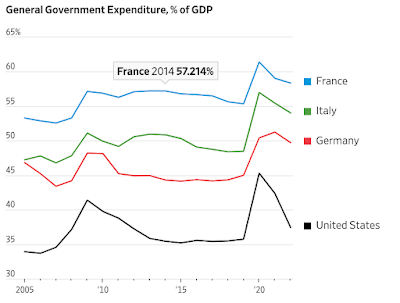 Unlike during the financial crisis, the eurozone crisis and the pandemic, free-spending governments are on a collision course with the [European Central Bank], which has raised interest rates at its fastest-ever pace to cool inflation. The eurozone’s inflation rate rose to 10.7% in October, a fresh high, while price growth in the U.S. slowed to 8.2% in September.

...The IMF last month urged Europe to cut state spending to support central banks in the fight against inflation

As interest rates go up, firms' cost of capital increases, and fewer investments are made, e.g., in capital equipment, in houses, cars. As spending decreases, incomes also decrease because one person's spending is another's income (this is the "Keynesian Multiplier" in your Macroeconomics class).
Posted by Luke Froeb at 7:53 AM

Email ThisBlogThis!Share to TwitterShare to FacebookShare to Pinterest
Labels: 03. Benefits; costs and decisions, 05. Investment decisions: Look ahead and reason back