Why is the renminbi falling?

From the Financial Times:


“We’re still seeing PBoC intervention,” said a trader with a bank in Beijing. “This is beyond our expectations.”

The central bank has been directing state-owned banks to buy dollars and has also been buying up more dollars itself.

Remember when the Central Bank of China buys dollars, it increases the demand for dollars, which raises the price of a dollar measured in renminbi's.

Equivalently, it also sells renminbi's, which increases the supply of renminbi's, and reduces the price of a renminbi measured in dollars.

The WSJ has a fun story of the rise, fall, and redemption of Team Oracle in the America's cup.  What interested me was that their over-reliance on computer simulation models almost cost Oracle the cup:


....Sailing upwind involves a trade-off between speed and distance—the tighter the angle to the wind, the shorter the total travel distance but the slower the boat moves. Mr. Ozanne's computer program had given a target: Sail into the wind at a relatively tight angle of about 42 degrees, which would produce the optimal mix of speed and travel distance.

Looking at the video, Mr. Spithill could see that the Kiwis had come to a different conclusion. They were sailing at much wider angles to the wind—about 50 degrees, on average. They were covering more water but reaching higher speeds—more than enough to offset the greater distance traveled. Foiling appeared to be the key. Oracle's computers hadn't anticipated such speeds.


MORAL:  models are tools that help you make decisions.  Like any tools, they are easy to misuse.

Why pay 249% more than the real thing? What advantage do fake pennies have over real ones? 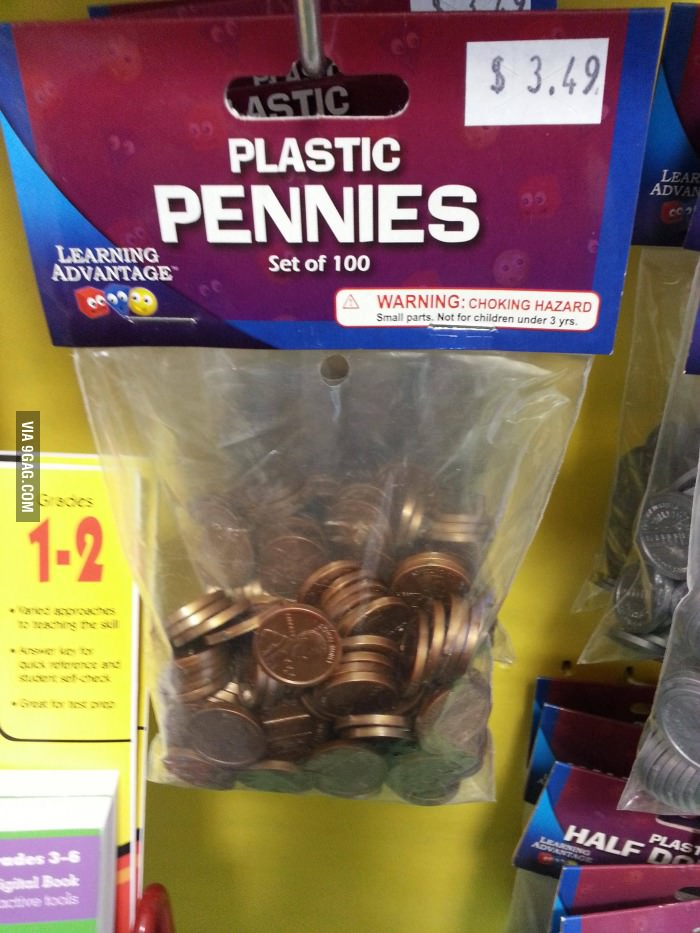 Perhaps it is a sorting mechanism to find gullible shoppers?
Posted by Michael Ward at 11:08 AM 5 comments:

Email ThisBlogThis!Share to TwitterShare to FacebookShare to Pinterest
Labels: 19: The Problem of Adverse Selection, Humor

How to Fill a Ballpark

Filling a ballpark is a classic example of a yield management problem. Demand for any game is uncertain but supply of seats is fixed. The team would prefer to set prices based on the expected demand for that game. Even better, let fans indicate the level of expected demand by their willingness to purchase early. Following this logic, more baseball teams are moving to dynamic pricing where the price of a seat changes over time as more or fewer are sold. As the Detroit Free Press reports:


“Dynamic pricing is based on consumer demand and generally affords fans who buy early to save more,” Duane McLean, executive vice president of business operations for the Tigers, said. “With dynamic pricing you could see the value of ticket prices increase and decrease based on demand."

Where supply cannot adjust, price does

WSJ has a piece on the pick up in construction borrowing, a sign of future supply.  The areas in orange above, have tighter supply.  When quantity cannot adjust to make demand=supply, prices have to.  The orange areas experienced much bigger price movements than the blue ones because they denote areas of limited supply.

In policy debates, the two parties rarely acknowledge that their choices have tradeoffs.  Instead, one party will point out the benefits, the other the costs.  In an adversarial system, we count on the two parties opposing interests to report all of the benefits and costs.

To the extent that we have a neutral arbiter, the CBO is it.  And they just came down hard on President Obama's two major initiatives,


...By providing households with a transfer payment to purchase health insurance that phases out as labor market income grows, Obamacare discourages work—period. The subsidy shrinks with income. That means for every additional dollar you earn, you lose a bit of support from Obamacare.

The White House and its allies have characterized this as a good thing, and as a free choice that households are making. This characterization insults basic economics reasoning. People electing to work less because the government has raised their marginal income tax rates is not quite an independent choice that deserves our congratulations. And since the health care subsidies are paid for by progressive taxes, this creates an awkward scenario where higher-income families are subsidizing the newfound leisure time of the less fortunate.


For the minimum wage, a similar finding


...The White House and its allies have been arguing that the minimum wage is basically a free lunch: There will be negligible job losses, and millions of workers will get a raise. The CBO rejected this talking point.

To be fair, there is considerable debate among economists as to whether and how much an increase in the minimum wage will decrease employment. But my opinion is that the weight of the evidence points to a noticeable decrease in employment among low-skill workers. The CBO agrees, arguing that an increase in the federal minimum wage to $10.10, as the president is proposing, will likely cause hundreds of thousands of jobs to disappear relative to a world without the minimum wage increase.

Email ThisBlogThis!Share to TwitterShare to FacebookShare to Pinterest
Labels: 03. Benefits; costs and decisions, 04: Extent (how much) Decisions, 08: Understanding Market and Industry Changes

When does introduction of a new brand cause higher prices on the old one?


To compensate for the introduction of a lower-end version of its big-selling Tide detergent, P&G is raising prices on some fancier Tide varieties by as much as 25%.

The explanations are not mutually exclusive.  The second depends on two different consumer types.  The first does not.

Posted by Luke Froeb at 3:00 PM No comments:

Put your money where your mouth is

Planet money has another show that is making me re-think my opposition to subsidies for public radio, The Bet

Paul Ehrlich, biologist, author of the population bomb, predicted that prices would go up as population grew.  He reasoned that predicted population increases would increase demand for minerals which would drive up their price.

Julian Simon, economist, predicted that technological advances would lower the cost of extraction, and that price increases would cause people to find substitutes.  In other words, supply would shift out and become more elastic as price went up.  If supply shifts faster than demand, then price goes down.

Simon won on all counts.

What is interesting about the interview is how anti-science Ehrlich seems in retrospect.  He is unwilling to subject his theory to empirical testing.
Posted by Luke Froeb at 8:18 AM 6 comments: