To align the incentives of employees with the goals of an organization, you have to give employees (i) enough information to make good decisions; and (ii) the incentive to do so. The most important part of creating good incentives is measuring performance.

When you want employees to devote effort to more than one task, you have to worry that they spend the right amount of effort on each task, e.g., so that sales employees spend the right amount of time cultivating new clients in addition to serving current clients. In this case, you might have to adopt more complex evaluation metrics, e.g., existing sales and sales from new accounts. With more than two tasks, this becomes even more complicated, and you are probably better off using subjective performance evaluation, using the observed metrics as inputs into the subjective evaluation.

When the two tasks compete with one another (to do more of one, you have to sacrifice the other), the management problem becomes almost intractible.  I was reminded of this when I heard about the Episcopal Church's competing "norms" for disposing of churches left empty by schismatic congregations: it wants "fair market value" for the property, but it also would prefer that the church not be sold back to the schismatic church.


When the schismatic church is the highest bidder for the property, their bid represents market value. In fact, this is the point of using an auction to sell the property. A diocese, like Binghamton, then faces a dilemma about which norm to follow. They cannot follow both. In this case, they gave up on fair market value in favor of discrimination against the schismatic bidder.

Have a well-defined problem that you want solved but little available in-house expertise to solve the problem? Post it to Kaggle.com with a prize amount for the best (or first solution). The registrants there represent talent from which you can crowd-source your problem.

Which undergraduate majors become the top 1%?

Look ahead and reason back: Louisiana

At least the governor is paying attention to the state's $18.5B pension shortfall:

Among his most substantial proposals, the governor wants to place new hires in a defined-contribution plan similar to the 401(k) plans that exist mostly in the private sector…

The governor also is seeking to require higher retirement contributions from some current state employees.

These are fair proposals. Most taxpayers have seen their retirement benefits diminished, and they should not be saddled with the system's $18.5 billion unfunded obligations…

Posted by Luke Froeb at 6:27 PM No comments:

The Economist thinks that the President made a serious mistake when he said his goal was winning the economic "war" with China, as if their prosperity is going to somehow make us worse off.

People who live outside of America are people just like Americans, and we should all rejoice in their rising prosperity, the more so when it occurs through additions to the stock of human knowledge that will benefit people everywhere. If an American president can't communicate that simple idea to his citizenry, out of fear that he'll be drummed out of office on a wave of nationalistic outrage, then he doesn't deserve to be president and his country doesn't deserve to win a damned thing, least of all the right to call itself "exceptional", a beacon of hope and freedom. A zero-sum world is a world without hope, and if Mr Obama is convinced that's what we're in then I don't see much need for him to stick around.

Change the rules or your rivals will: taxi competition in Nashville

Earlier we blogged about the efforts of Metro City Council to eliminate competition from low price taxi's. This week, a court refused to dismiss a suit challenging the law as anti-competitive.

...the new rules stemming from the Ordinance serve no legitimate public health or safety purpose,” Sharp continued, “and by alleging that the Ordinance was enacted not to protect any such purpose, but rather to protect limousine companies and taxicab companies from competition.”

Score this for Nashville consumers.
Posted by Luke Froeb at 3:09 PM 9 comments:

This didn't take long: CATO debriefs the State of the Union Address

There is a lot of rich material in here. Gotta love the quick turnaround.

Because with an after-tax investments, one round of taxation occurs before I even invest it. It was taxed when I initially earned it. Any additional taxes are – additional taxes. The only way to make scenarios 2 and 3 equivalent is to have a tax on capital gains of 0%. Otherwise we are taxing capital income at a higher rate than wage income.

We may "want" to (read “it may be efficient to”) tax capital income at a higher rate than wage income. But I doubt it. This is not controversial among economists. There is a well established public finance literature that finds that the optimal taxation of capital income is 0%.* I do not know, but I suspect that Romney paid taxes on the income that he then invested. His 15% tax rate (it appears to actually be lower) would not be lower than the rates paid by most people. Because it is was taxed once already, it would be in addition to the rate that other people pay.

*There are simplifying assumptions above and there are some modern public finance results in which, with the right assumptions, it is efficient to have positive capital gains taxes. Even then, they would likely be less than the current 15%.

Mongolia is in the midst of a mining boom, with big copper, gold and coal reserves. It will likely fall victim to the resource curse, sometimes called the paradox of plenty, that resource-rich countries tend to be worse off than their neighbors. This is caused by a variety of factors, including mismanagement and corruption caused by political populism, promising government payoffs in exchange for votes.

To combat this, the major parties in Mongolia have agreed on a "no handouts" policy. I suspect it will last as long as Newt Gingrich's pledge not to attack his fellow Republicans.
Posted by Luke Froeb at 4:28 PM No comments:

Capitalism vs dirigisme, and the winner is...

The Economist has a special report on the emergence and apparent success of State Capitalism in China, Russia, and Brazil, and to a lesser extent, the US (think the auto bailout).

Is state capitalism the wave of the future, or is it simply one in a long line of state-sponsored failures? Some commentators have seized on the riots in Russia in December as evidence that it is already on its way out. Others point to the continuing problems with global capitalism, arguing that the state variety is winning the war of ideas. Andy Stern, a former boss of the powerful Service Employees International Union, argues that China’s economic model is superior to America’s and quotes Andy Grove, the founder of Intel: “Our fundamental economic belief …is that the free market is the best of all economic systems—the freer the better. Our generation has seen the decisive victory of free-market principles over planned economies. So we stick with this belief largely oblivious to emerging evidence that while free markets beat planned economies, there may be room for a modification that is even better.”

For its apparent success--and I say apparent because it depends on what you think the alternative would look like--state capitalism has flaws that anyone who has read Chapter 21 would recognize:

Management theorists have long agonised about the “principal-agent problem”—the tendency of managers to run companies to suit their own interests rather than the interests of their owners or customers. Under state capitalism this problem is as acute as anywhere. Politicians are too distracted by other things to exercise proper oversight. Boards are weak and disorganised. And the company’s mission tends to be a confusion of the commercial and the social.

The result is an erosion of liberty:

... By turning companies into organs of the government, state capitalism simultaneously concentrates power and corrupts it. It introduces commercial criteria into political decisions and political decisions into commercial ones. And it removes an essential layer of scrutiny from central government. Robert Lowe, one of the great Victorian architects of the modern business corporation, described businesses as “little republics” that operate as checks and balances on the power of the big republic of government. When the little republics and the big republic are one and the same, liberty is fatally weakened

So today would be one of those natural experiments businesses should exploit to uncover the substitution patterns between classified ads sources and their effects on their businesses.
Posted by Michael Ward at 7:00 AM No comments:

RentStuff.com (started by a Vandy alum) is a secure, collateral-backed mechanism to facilitate transactions between those who have stuff and those who want to rent stuff.

Romney futures trading at 80% on InTrade

Is it too much of a stretch to say that the futures market predicted this?

Shows that the risk premia for investing in govt debt disappeared when the countries joined the European Union.  They reappeared in 2008.

at Zerohedge.  Here are my favorites:

Posted by Luke Froeb at 5:15 PM No comments:

This guy sounds as if he read our chapter on bargaining

His company, Think! Inc., advises clients that the alternatives to agreement determine the terms of agreement.

Why do students get discounts? 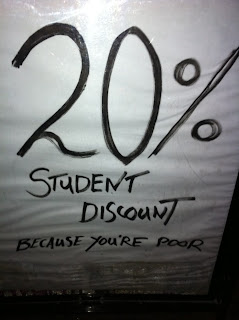 Men are twelve times as likely to die from work 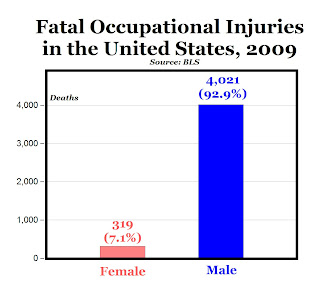 Mark Perry has a nice post on gender differences in employment.  This could explain the high wages paid to men, i.e., compensation for accepting riskier jobs.

Posted by Luke Froeb at 3:17 PM No comments: