Successful economists do not need to self-symbolize

...by typing their names in a larger font, bold, capitalized, italic, or underlined, on their resume's.  The hypothesis that


success is positively correlated with goal completion and should reduce the need to self-symbolize.


finds support in the data.

PS.  For those of your curious about whether I self-symbolize (practice conjugating this verb!), my resume is here.
Posted by Luke Froeb at 2:24 PM 3 comments:

Email ThisBlogThis!Share to TwitterShare to FacebookShare to Pinterest
Labels: Humor

The collapse of Venezuela illustrates the power of incentives, albeit in a negative way.  When the daughter of the former president is one of the richest people in the country, it is a sign that the wrong activities are rewarded. From Tyler Cowen:

By boosting government spending so quickly, the Venezuelan government was sending a message that the key to future riches is courting government favor, not starting new businesses.

[Exports]... bring in foreign exchange, provide contacts to foreign markets, and force parts of the economy to learn how to compete with the very best foreign companies. Yet over 90 percent of Venezuela’s exports are oil, and those resources are owned and controlled by the government. For this all-important growth driver, Venezuela comes pretty close to full socialism — to its detriment.

Email ThisBlogThis!Share to TwitterShare to FacebookShare to Pinterest
Labels: 02: The One Lesson of Business, 21: Getting employees to work in the firm’s best interests

Charlie Munger on why rich people are valuable to a city

From Market Watch:  After Amazon decided to nix its planned HQ2 in New York, with its promise of high paying jobs, Charlie Munger (Warren Buffet's partner) commented on the loss:

“They’re old. They keep your hospitals busy. They don’t burden your schools, the police department, your prisons. They give a lot. Who wouldn’t want rich people?"

The nonagenarian’s comments come as Amazon.com Inc. AMZN, -0.91% announced on Thursday that it was canceling plans to build its New York City headquarters in Long Island City, and wouldn’t be seeking a replacement venue.

Bidding advice from an unlikely source

In a first-price auction where the low bid wins, bidders face a tradeoff: a lower bid increases the probability of winning, but reduces profit if they win. In Rising Strong (p. 187), Brene Brown, a professor of social work, identifies five psychological traps that distort how bidders view the tradeoff, which can lead to suboptimal bidding.


The main point of Brown's book is to present her "rising strong" algorithm on how to grow from conflict.    The bidding advice was lagniappe (Louisiana slang), at least to me.
Posted by Luke Froeb at 3:58 PM 5 comments:

Even Dolphins will game an imperfect reward system. 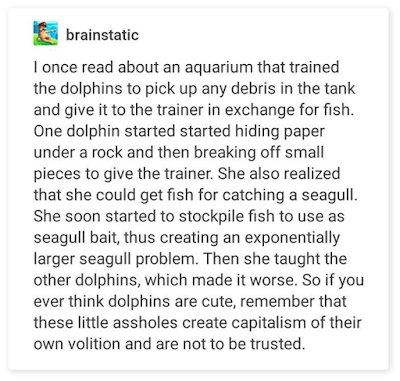 Statistical and taste-based discrimination against (lonely) men in online markets


We find that women sell baseball cards for a higher price and greater profit on eBay compared to men.

Interestingly, the paper finds both statistical and taste-based discrimination:


...the reason for a higher price appears to be at least partially based on statistical discrimination, with respondents believing that female sellers were more likely to handle the card carefully and promptly mail it after purchase and less likely to present problems in completing the transaction. Part of the discrimination may also be taste–based. In the eBay experiment, women obtained higher prices and profits even for cards that had been professionally graded, where the quality of the card should not have been in doubt. And MTurk respondents were also more likely to want to meet the female sellers in person and believed they were attractive.

Email ThisBlogThis!Share to TwitterShare to FacebookShare to Pinterest
Labels: 17. Making decisions with uncertainty, 19: The Problem of Adverse Selection


The sharing economy has a discrimination problem. Studies have shown that the sharing economy isn’t as open as we think: People of color are discriminated against on platforms such as Airbnb, Uber, and Lyft. A study of ride-hailing platforms found that black passengers were subjected to longer wait times and higher cancelation rates than white passengers. A study of Airbnb found that guests with African-American-sounding names were 16% less likely to be accepted by hosts than guests with white-sounding names.

This article suggests that this is statistical rather than taste-driven discrimination,


...if a host believes that African-Americans as a demographic group have higher incarceration and crime rates, the host will associate a prospective African-American guest with lower quality.

In other words, without information about guest quality, the "hosts may use race to infer quality."

Such statistical discrimination has a relatively easy fix, give the hosts more information about guests.  The authors ran an experiment that did this:


When a guest did not have any review information on their profile page, white guests had a much higher acceptance rate (48%) than black guests (29%). However, once each guest had at least one positive review, the acceptance rates became almost identical: 56% and 58%, respectively.


...build a credible, easy-to-use online reputation and communication system. Bringing information to light, rather than trying to hide it from users, is more likely to be a successful approach to tackling discrimination in the sharing economy.

Email ThisBlogThis!Share to TwitterShare to FacebookShare to Pinterest
Labels: 17. Making decisions with uncertainty, 19: The Problem of Adverse Selection

What do restaurants have in common with airlines?

They both use revenue management (peak load, variable, or surge pricing) to maximize profit.


On Super Bowl Sunday in 2014, Nick Kokonas, co-owner of Alinea, a molecular gastronomy restaurant in Chicago, sent out a tweet inviting diners who didn’t care about football to make a reservation for $165 that evening—about 35% off the normal price of dinner. He told Grub Street that they went from 30 reservations to 74 for the evening, traditionally the slowest of the year.

For some, saving $80 on a dining experience at the cost of watching the biggest football game of the year (while enjoying markedly less esoteric fare) might not be worth it. But diners eager to try a place with a hefty price stand to benefit, though they may not actually end up spending less.

Bob Bob Ricard, a high-end London restaurant, charges 25% less for its à la carte menu during off-peak times, with a 15% “mid-peak” discount. “When they come in on off-peak days, they’re not necessarily looking to spend less. They’re looking to get more for the full budget,” owner Leonid Shutov told NPR. “So our average checks have not changed in any meaningful way on those days because the customers are rewarding themselves with more special things—with a bit of caviar, with a little bit more Champagne than they may have had otherwise.”

Evidence of loss aversion in Golf

Loss aversion refers to irrational decisions that are made to avoid perceived losses, rather than maximize expected value (which weights losses and gains equally).  This paper finds "that golfers are more likely to protect par (the number of strokes that an average highly-skilled player should take to complete a hole) than they are to make birdies (a score of one less than par)."

Note that such loss aversion requires a "target" like par, around which losses and gains are measured.  When par changes on a hole, e.g., from 5 to 4,  professional golfers are likely to make sure they make par, rather than take a chance on making a birdie, even when doing so would be optimal from an expected value point of view.