What is the difference between public and private-sector unions?

at 1:44: If a consumer doesn't like the price offered by private sector company, they can take their business elsewhere. The cost of "opting out" of an over-priced state government is much higher. This gives public sector unions greater bargaining power. Remember the Chapter 16 aphorism: "the alternatives to agreement determine the terms of agreement."

What happens when the price of sex falls?

...despite the fact that women are holding the sexual purse strings, they aren't asking for much in return these days—the market "price" of sex is currently very low. There are several likely reasons for this. One is the spread of pornography: Since high-speed digital porn gives men additional sexual options—more supply for his elevated demand—it takes some measure of price control away from women. The Pill lowered the cost as well. There are also, quite simply, fewer social constraints on sexual relationships than there once were. As a result, the sexual decisions of young women look more like those of men than they once did, at least when women are in their twenties. The price of sex is low, in other words, in part because its costs to women are lower than they used to be.

Note that this is what is known as an example of "economic imperialism," using economics to analyze phenomenon that are traditionally analyzed in other fields of study.
Posted by Luke Froeb at 10:58 AM 2 comments:

How bad is our fiscal crisis?

Unimaginably bad.  We are going to look back fondly at the debates in Wisconsin.


The bottom line, then, is that we need to look at the infinite-horizon fiscal gap not just for Social Security, but for the entire federal government. That analysis, based on the Congressional Budget Office’s long-term alternative fiscal scenario, shows an unfathomable fiscal gap of $202 trillion. And covering this gap requires coming up with the aforementioned 12 percent of GDP, forever.

Is there any air left in the housing bubble?

Robert Shiller thinks that prices will have to fall 10-15% before we get back to the pre-bubble days.
Posted by Luke Froeb at 12:28 PM No comments:

Doug Holtz-Eakin on the President's budget

NOTE: Doug Holtz-Eakin is speaking at Vanderbilt on March 23 at an invitation only event. If you are an alum and want to come, drop me a line.
Posted by Luke Froeb at 3:25 PM No comments:

Why did the Wisconsin unions blink?

In Wisconsin, spending is several billion dollars higher than revenue, and the new Republican governor submitted a budget that asks state Public Employees to pay a much bigger share of their healthcare and pension costs. It also limits the ability of the public employee union to collect the $700 dues from the public employees. It makes contributions voluntary, instead of mandatory.

The budget would have certainly passed the senate, so the Democratic state senators left the state to prevent a vote. After two days the public employees' union agreed to the higher pension and healthcare contributions, but the governor rejected their concessions.

This dispute illustrates several economic principles. First, it illustrates the "free riding" problem faced by unions. In so-called right to work states, unions can bargain on behalf of workers, but they cannot compel workers to contribute to the union. Since the workers receive the benefits of union representation regardless of whether they pay union dues, few actually choose to pay. This limits the ability of unions to collect big dues, so they lower the dues they charge, and this limits their ability to raise money to influence legislators to give them generous benefits. This is a form of the prisoners' dilemma.

The second principle illustrated by the dispute is the nature of bargaining. If we think about the dispute being resolved not by compromise, but rather by an appeal to the voters of the state, the winning strategy is to move to the center, i.e., to offer an alternative that appeals to the median voter. By offering the wage and price concessions, the union is trying to reframe its alternative as much more reasonable than the one they started out with.
Posted by Luke Froeb at 12:10 PM No comments:

If you outsource, don't make this mistake

...don't tell your subcontractors that if they run into problems, you will take care of them. This decreases their incentive to succeed:

Among the least profitable jobs in aircraft manufacturing, he pointed out, is final assembly — the job Boeing proposed to retain. But its subcontractors would benefit from free technical assistance from Boeing if they ran into problems, and would hang on to the highly profitable business of producing spare parts over the decades-long life of the aircraft. Their work would be almost risk-free, Hart-Smith observed, because if they ran into really insuperable problems they would simply be bought out by Boeing.

Its not hard to guess what happened next.

What do you know? In 2009, Boeing spent about $1 billion in cash and credit to take over the underperforming fuselage manufacturing plant of Vought Aircraft Industries, which had contributed to the years of delays.

Posted by Luke Froeb at 3:06 PM No comments:

A former student alerts me to a NY Times article, that seems to follow on to previous post:


For centuries, marriage was viewed as an economic and social institution, and the emotional and intellectual needs of the spouses were secondary to the survival of the marriage itself. But in modern relationships, people are looking for a partnership, and they want partners who make their lives more interesting.

Can economics help your marriage?

Posted by Luke Froeb at 3:52 PM No comments:

President Obama presents us with a road map guaranteed to result in a crisis:


“The President had an opportunity to show real leadership by proposing a budget that charts a course to fiscal responsibility, but unfortunately his proposal will lead to more spending, higher taxes, and crushing debt,” said Holtz-Eakin. “Today’s budget ignores recommendations from his own Commission on Fiscal Responsibility and offers little more than a cosmetic reworking of last year’s irresponsible plan. The past two years are proof positive that we can’t spend our way to a recovery, a plan for success requires spending controls and pro-growth economics.”

Click here to talk to a suicide prevention hotline. 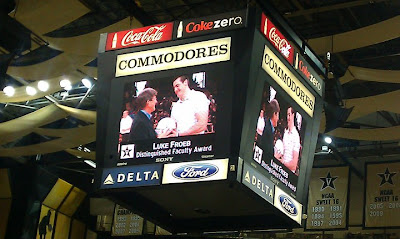 Posted by Luke Froeb at 5:45 PM No comments:

The Catholic Church appears to have a unique strategic variable in its quest for market share for adherents. Robert Barro and Rachel M McCleary examine the region of origin of saints in "Saints Marching in, 1590-2009" and find evidence consistent with beatification and canonization being used as a response to inroads made by Protestants and Evangelicals.

Abstract
The Catholic Church has been making saints for centuries, typically in a two-stage process featuring beatification and canonization. We analyze determinants of rates of beatification and canonization (for non-martyrs) over time and across six world regions. The research uses a recently assembled data set on numbers and characteristics of beatifieds and saints chosen since 1590. We classify these blessed persons regionally in accordance with residence at death. These data are combined with time-series estimates of regional populations of Catholics, broadly-defined Protestants, Orthodox, and Evangelicals (mostly a sub-set of Protestants). Regression estimates indicate that the canonization rate depends strongly on the number of candidates, gauged by a region's stock of beatifieds who have not yet been canonized. The beatification rate depends positively on the region's stock of persons previously canonized. The last two popes, John Paul II and Benedict XVI (the only non-Italians in our sample), are outliers, choosing blessed persons at a much higher rate than that of their predecessors. Since around 1900, the naming of blessed persons seems to reflect a response by the Catholic Church to competition from Protestantism or Evangelicalism. We find no evidence, at least since 1590, of competition between the Catholic and Orthodox Churches.

Posted by Michael Ward at 5:46 PM No comments:

Humor: the cost of a candy bar is what you give up to get it

Posted by Luke Froeb at 9:38 AM No comments:

Unstimulated by the Stimulus

... is how I read a new working paper James Feyrer and Bruce Sacerdote. They ask "Did the Stimulus Stimulate? Real Time Estimates of the Effects of the American Readjustment and Recovery Act" and answer perhaps for some agencies but overall, no.

Abstract
We use state and county level variation to examine the impact of the American Readjustment and Recovery Act on employment. A cross state analysis suggests that one additional job was created by each $170,000 in stimulus spending. Time series analysis at the state level suggests a smaller response with a per job cost of about $400,000. These results imply Keynesian multipliers between 0.5 and 1.0, somewhat lower than those assumed by the administration. However, the overall results mask considerable variation for different types of spending. Grants to states for education do not appear to have created any additional jobs. Support programs for low income households and infrastructure spending are found to be highly expansionary. Estimates excluding education spending suggest fiscal policy multipliers of about 2.0 with per job cost of under $100,000.

But, hey, it only cost us a trillion dollars to find out.
Posted by Michael Ward at 3:38 PM 1 comment:

How do we interpret January's job report?

Doug Holtz-Eakin is not sanguine:


The bottom line: Taken as a whole, the January report is a net negative — few jobs, few hours, and massive labor-force departure. The glimmer of good news may be arising from a new policy climate more favorable to small business.

SPECIAL OFFER TO VANDY ALUMS:  Doug will speak at an invitation-only lunch at Vanderbilt on March 23.  Send me an e mail if you want to come.
Posted by Luke Froeb at 9:59 AM 1 comment:

Apartment values also are getting boosted by powerful supply-and-demand forces. Renter households now top a record 37 million after increasing more than 3.5 million in the past five years, partly due to the foreclosure crisis. Green Street Advisors expects an additional 4.4 million rental households to be added by 2015.
Posted by Brian McCann at 7:41 AM 1 comment:

So claims a new working paper:

Abstract:
The effect of competition on the quality of health care remains a contested issue. Most empirical estimates rely on inference from non experimental data. In contrast, this paper exploits a pro-competitive policy reform to provide estimates of the impact of competition on hospital outcomes. The English government introduced a policy in 2006 to promote competition between hospitals. Patients were given choice of location for hospital care and provided information on the quality and timeliness of care. Prices, previously negotiated between buyer and seller, were set centrally under a DRG type system. Using this policy to implement a difference-in-differences research design we estimate the impact of the introduction of competition on not only clinical outcomes but also productivity and expenditure. Our data set is large, containing information on approximately 68,000 discharges per year per hospital from 160 hospitals. We find that the effect of competition is to save lives without raising costs. Patients discharged from hospitals located in markets where competition was more feasible were less likely to die, had shorter length of stay and were treated at the same cost.


100 IBMers born in 100 years tell about 100 IBM inventions from their birth years.
Posted by Michael Ward at 2:47 PM No comments: