The opportunity cost of studying art

From the Economist: economists are paid a huge premium (100%) to compensate them for studying econ vs. art.  Or to turn it around, art majors forego about $50,000/year to study art. 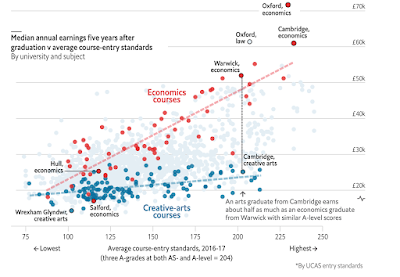 Many gifted arts students would struggle to crunch numbers. But for those who can excel at both, the cost of sticking with the arts, in terms of forgone wages, is steep. Cambridge creative-arts students have a-level scores close to those of economics students at Warwick, but earn about half as much. That is tantamount to giving up an annuity worth £500,000.

Who can afford such indulgence? The answer is Oxbridge students, who often have rich parents. At most universities, students in courses that lead to high-paying jobs, such as economics and medicine, tend to come from wealthier families, partly because such applicants are more likely to have the examination scores necessary to be accepted. At Oxbridge, however, no such correlation exists. History and philosophy students there come from richer parts of Britain, on average, than their peers studying medicine do. 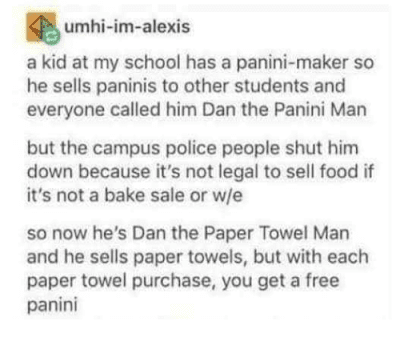 Why are baseball salaries falling?

Because the profitability of winning has fallen with increases in revenue sharing:

“If you’re at the top, and you’re going to have to share more of your revenue with low-revenue teams, then maybe you’re less willing to pay on hiring that new player,” Bradbury tells Deadspin. (Revenue sharing, in case you’re wondering, operates like a marginal tax even on low-income teams’ revenues, since the size of their checks dwindles for each additional dollar they earn themselves.


In fact, economists had predicted that salaries would eventually fall:

“A lot of us in academia wrote about that and actually told the players’ association that that was going to be the effect,” says Stanford sports economist Roger Noll. “And they didn’t really believe us, because they thought that salaries were driven simply by total income, not by the increment to income driven by a player.”

Email ThisBlogThis!Share to TwitterShare to FacebookShare to Pinterest
Labels: 04: Extent (how much) Decisions, 23. Managing vertical relationships 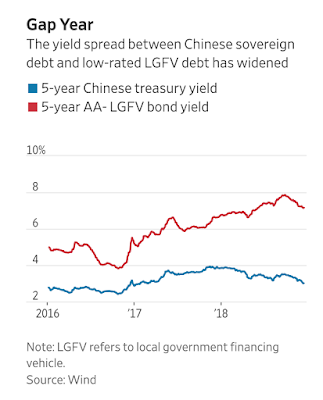