Marketplace has an interesting story about Amazon's new Kindle Fire. Amazon might succeed where others have be able failed because it might to exploit complementarities. Here's part of the transcript:

And something else is smaller too: the price.

Sarah Rotman Epps: You could buy four Kindle Fires for the price of one souped-up iPad.

That's Sarah Rotman Epps, a tech analyst with Forrester Research. Epps says Amazon may be selling the Fire at a loss. That's because the online retailer wants the Fire is to function mainly as a virtual shopping cart.

Epps: Putting this device in consumer's hands pretty much guarantees that they will be a serious Amazon spender.

Analysts predict sales of the Fire could top three million this year. The tablet ships on November 15th -- in plenty of time for you know what.

This XKCD cartoon has a different message for social scientists. Why don't more college football fans bet against their alma maters? Wouldn't that make them happy no matter the outcome?
Posted by Michael Ward at 9:45 AM 1 comment:

Why is this so shocking?

How does the current crisis compare to others?

Compared to post-war US recessions, it looks worse:

But compared to world financial crises, it doesn't look as bad.

The GTX Corp has developed GPS enabled shoes so that loved ones can better monitor Alzheimers patients. I, of course, immediately though of the application in which jealous wives give them to their husbands.
Posted by Michael Ward at 7:39 AM No comments:

I'm not sure a solar powered trash compactor is ever efficient. But, when you place it indoors it becomes much less efficient. 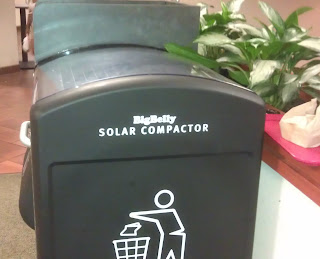 What was Netflix Thinking II?

Reed Hastings, Co-Founder and CEO, Netflix fesses up about their pricing blunder. The best part has to do with overall business strategy.

Most companies that are great at something – like AOL dialup or Borders bookstores – do not become great at new things people want (streaming for us) because they are afraid to hurt their initial business. Eventually these companies realize their error of not focusing enough on the new thing, and then the company fights desperately and hopelessly to recover. Companies rarely die from moving too fast, and they frequently die from moving too slowly.

amen brother
Posted by Michael Ward at 11:59 AM 1 comment:

The Congressional Super Committee was charged with negotiating for deficit reduction and it membership is split evenly between the blue and red teams. It has been clear that, as part of the package, the blue team wants to raise taxes and the red team does not. No one doubts that the leaders of these two teams, President Obama and Speaker Boehner, are giving private instructions to the committee members from their team. So why should these two make public announcements here and here?

Perhaps these are commitment devices. Speaker Boehner can easily go back on a private "line in the sand" spoken to committee members. It is harder for him to repudiate a public statement (though it has been done). So President Obama has to stake out his territory and commit to his version of the deal in which one-third of the amount is from tax increases. Negotiations when both sides commit to intractable positions usually do not end well.
Posted by Michael Ward at 11:28 AM 1 comment:

Sure to make booms higher and busts lower. Wow.

A bank's capital ratio is designed to measure a bank’s capital relative to its risk exposure and is one of the ratios that regulators like the FDIC and the Bank of International Settlements uses to measure the "health" of a bank.  Here is how a banker sees the new regulations:

When I returned to my office this morning I received a call from a trade group person who told me that the new Tier 1 Leverage ratio for banks is now unofficially 9%, up from 5% that has been in place for years.

The combined shock to the system of capping debit card fees, doubling the capital requirement, significantly restricting OD charges plus the impact of 263 new regs from Dodd-Frank and all within 3 years is severe.

The higher capital requirements (almost double) cut the returns to capital almost in half. This is part of the reason that Bank of America's is raising capital from Warren Buffet:

Under the terms of the deal, Berkshire will buy $5 billion of preferred stock that pay a 6 percent annual dividend, and receive warrants for 700 million shares that it can exercise over the next 10 years. Bank of America has the option to buy back the preferred shares at any time for a 5 percent premium.

If you take a step back, we see that the regulators are running a procyclical policy: reducing capital requirements in boom years (before 2008); and raising them in bust years (today).

Posted by Luke Froeb at 2:32 PM No comments:

What makes Germany so different?

ten years ago, German unemployment was just as bad as the rest of Europe's.  But now it has a 6% and falling .  What is their Secret?  Planet Money has a 16 minute podcast that gives you the answer:

Posted by Luke Froeb at 1:21 PM No comments:

Email ThisBlogThis!Share to TwitterShare to FacebookShare to Pinterest
Labels: 01. Introduction: What this book is about

Search and Pricing Power Even in the Longrun

I sometimes teach search theory. And XKCD gets it in one picture.

An important implication is that, often, it is not worth it for a customer to find a better price. It depends on the costs of obtaining the new price quote and the variation in prices. From the seller's perspective, this means it can set prices above marginal cost and still retain some customers. Customers' different search costs can be the source for a firm having a downward sloping demand curve. So, even in the long-run with free entry, firms' prices need not equal marginal cost.
Posted by Michael Ward at 7:21 AM 1 comment:

The success of the Brazilian economy has lead to opportunities for investors which increases demand for loans, leading to high interest rates.  In turn, the high interest rates in Brazil are attracting foreign investors, who sell dollars to buy real.  This can be modeled as an increase in demand for real (or an increase in supply of dollars) which results in real appreciation or dollar depreciation.

The strong real is an even bigger problem for manufacturers. Humberto Barbato owns a company that makes parts for high-power transmission lines. Decades ago, he benefited from government policies that helped manufacturers set up export businesses. Now the currency is pricing him out of hard-won overseas markets. At home, he's losing clients to cheap Chinese imports.

He does get some comfort. While visiting his son in Florida recently, he went on a strong-real shopping binge with the other Brazilians at the local mall. "That's my revenge," Mr. Barbato said.

How can the government create jobs?

Doug Holtz Eakin has the answer

Posted by Luke Froeb at 9:34 AM No comments:

But don't we have an obligation to teach our students how to do it?
Posted by Luke Froeb at 2:06 PM 2 comments:

What do Switzerland (top) and Norway have in common?

ANSWER: They are both "safe havens."


Norway’s krone will gain further as investors “desperate” for protection against a deepening European debt crisis turn to one of the few haven markets that isn’t overvalued, said Deutsche Bank AG, the world’s biggest currency trader.

The krone rose more than any other major currency against the franc on Sept. 6, when the Swiss National Bank said it will defend a target of 1.2 against the euro with “utmost determination.” As Swiss efforts to shut the door on franc appreciation force investors to turn elsewhere, the krone will be one of the currencies to fill the vacuum, said Henrik Gullberg, a London-based strategist at Deutsche Bank.

“There is a desperate need for safe havens and the krone is an obvious candidate,” Gullberg said in a phone interview yesterday. “The krone is not significantly overvalued, which is another thing that is attractive.”

Investor's are selling euros (and dollars) and buying Norwegian krona and Swiss francs, which can be thought of as an increase supply of dollars, which reduces its price (measured in francs or krona) in the foreign exchange market.

Footnote:  the resulting appreciation has hurt exporters in Switzerland, and induced the Swiss central bank to print money to buy foreign currency.  This selling francs to buy dollars has brought down the value of the franc a little, it has also caused the bank to suffer huge losses on its foreign currency holdings (about 5% of Swiss GDP).
Posted by Luke Froeb at 11:43 AM 1 comment: 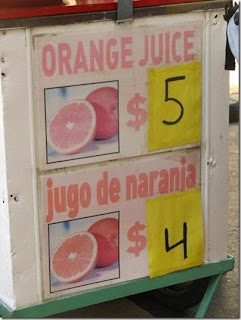 Link to Carpe Diem for more photos.
Posted by Luke Froeb at 12:41 PM No comments:

The compensation for being male

Nicely produced lecture on free trade by Don Boudreaux.
Posted by Luke Froeb at 11:28 AM No comments:

Email ThisBlogThis!Share to TwitterShare to FacebookShare to Pinterest
Labels: 02: The One Lesson of Business
Newer Posts Older Posts Home
Subscribe to: Posts (Atom)