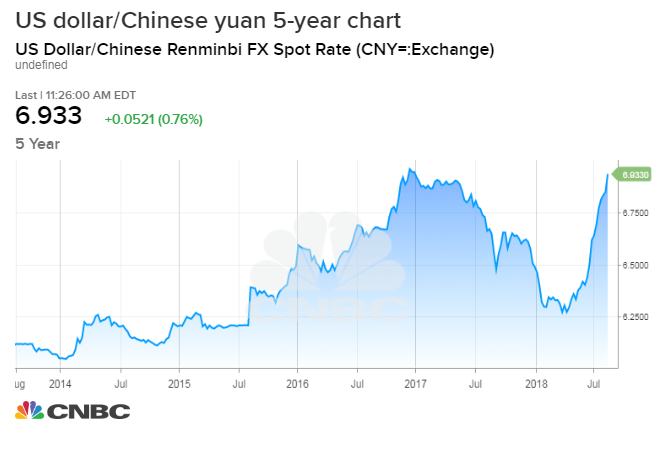 In the market for foreign exchange, the price of a dollar is appreciating relative to the Chinese yuan, nearing 7 yuan/dollar.  Either:


According to the article, this could be due to fears of a trade war with the US:

Both of these would lead to a decreased supply of dollars and a higher "price" of dollars.

In terms of a broader strategy, a stronger yuan would hurt Chinese producers with plants in China and could lead to unemployment.  This could put pressure on Chinese politicians to loosen up unfair restrictions on foreign firms and/or strengthen Chinese enforcement of US intellectual property rights.
Posted by Luke Froeb at 8:00 AM 10 comments:

Are we in a housing bubble?

The term "bubble" means that prices are too high.  But the question is difficult to understand unless we know what to compare them to.  We can use the ideas of Chapter 9 to measure housing prices relative to the cost of renting.  Because renters can buy, and owners can sell and rent, in the long run the prices should be comparable (a mobile asset should be indifferent about where it is used).  Here is the Fed data on the relative costs of owning relative to renting. 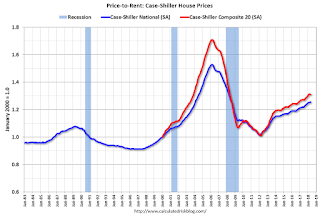 To measure advertising effectiveness, we want to make a simple comparison, "Did showing the ads change users' behaviour, relative to not showing them?"


This is especially hard to do when algorithms choose ads to show to consumers who are most likely to buy.  This leads to Selection Bias:  one cannot tell whether people purchase because they were shown the ad (the "treatment effect," what we want to measure) or whether people who were going to purchase anyway were shown the ad ("selection bias," what we want to rule out)

Figure 4 illustrates how it work. 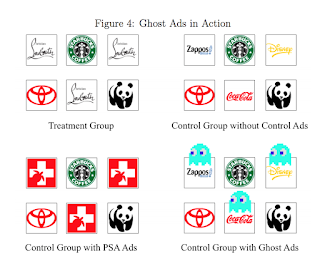 The treatment group (upper left) sees three Louboutin shoe ads and three ads from other advertisers. The ad platform "selects" the control group (lower right) as those consumers who would have seen an identical quantity and order of the other ads.  To create the control, the researcher simply "ghosts" the ads that would have appeared in the same order and location as the Louboutin shoe ads.

Google also can select users to match the demographics of the treatment and control groups.

MORAL:  Carefully designed experiments can accurately measure causal relationships.  In this case, the treatment ads lifted website visits by 17% and purchases by 11%.

REPOST: can I take credit for this?

Former student Ford Scudder (NJ state treasurer) must have been paying attention in class, as he reduced the discount rates for NJ defined benefits pension system from 7.9% down to 7%.  The move is controversial as it increases the amount that NJ must set aside for its generous retirement benefits:


The decision will likely increase what the state will have to pay into the pension system next year by $234 million, according to the Treasury Department. Instead of a $3 billion pension contribution in his first budget, Murphy [the new Governor] would likely have to make a $3.2 billion contribution under that estimate.

But it is better in the long run:


“Given the current elevated level of asset values across the board, long-run expected returns have diminished, so it is appropriate to lower the assumed rate of return,” Rijksen said. “Our actuaries have suggested doing so, and it is the unmistakable trend in public pension plans across the country, with some other 20 state pension plans having adopted or being in the process of moving to an assumed rate of return at 7 percent or below.”

Readers of this blog will know that I motivate the topics of discounting and its inverse, compounding, with use our under-funded defined-benefits pensions.  Here is a recent post about another fund, from another under-funded state, doing the same thing:

Calstrs, the second biggest pension fund in the world, just admitted that it is reducing its target rate of return (also its discount rate) from 7.5% to 7.0%.  The increase in payments is split between the teachers and the State of California, the employer of the teachers.

However, a new study from facebook finds a way to cleverly construct a control group that is not subject selection bias.  By comparing "conversion" rates for the winner of an ad auction, e.g., page viewing, registering, or buying, to what would have happened had the second-best bidder won the ad auction, facebook estimates the causal effect of ads (free from selection bias).

Because facebook has "single user login" they can:
The study concludes that targeted ads a 73% increased likelihood of conversion.

UPDATE FROM READER:  I think that this is the same idea as "ghost ads".   See simple exposition or the paper.(Ungated: https://courses.cit.cornell.edu/jl2545/adpapers/Randall%20Lewis.pdf)

Book recommendation: Algorithms to Live By


Good book written by Computer Scientists.  Each chapter begins by describing how algorithms solve a class of problems, like Optimal Stopping, Sorting, Caching, Scheduling, and the Multi-arm Bandit problem. Then, the authors draw advice from the algorithms to solve analogous problems for humans.

For example, in the scheduling chapter, the authors describe early attempts to split CPU (Central Processing Unit) time among various tasks.  Scientists found that as the number of tasks increased, the CPU would start spending more and more time on the meta-task of scheduling.  When too many tasks where adding, the computer would spend all its time "thrashing," switching between tasks without getting any work done.

The metaphor to our own lives is obvious.  Set aside a certain amount of time for uninterrupted work, especially when writing, and avoid switching between lots of small tasks, e.g., answer e mail only once per day.
Posted by Luke Froeb at 6:35 PM 3 comments:

Do Boys have a Comparative advantage in Math?

Nice article from Alex Tabborock suggesting that the male preference for STEM majors is driven by their comparative--not absolute--advantage in math.  Here is the difference:

This explanation can be understood in terms of marginal analysis of two tasks, i.e., the opportunity cost of doing one is the foregone benefit of doing the other.  For boys,


which drives their revealed preference for math (or STEM) over English (non STEM).
Posted by Luke Froeb at 6:22 AM 3 comments:

The WSJ first reported that Amazon employees have taken bribes to provide information on product reviews and even to have negative reviews simply removed.


According to the report, middlemen use social media sites like WeChat to track down Amazon employees, offering them cash to turn over internal information or to delete negative reviews. The WSJ also reports that it costs roughly $300 to take down a bad review, with brokers “[demanding] a five-review minimum” per transaction. Amazon employees have also been asked to provide e-mail addresses of customers who left negative reviews, or to provide sales information to give sellers an edge against their competitors. To combat the behavior, an Amazon spokesperson told the WSJ that it has implemented “systems to restrict and audit what employees can access.”


This is not too different from payola in which recording studio reps paid DJ's to play their songs and thus give a boost to record sales. The problem for the station is that it undermines whatever relationship that it might have with a competing studio. Agents are not working in the principal's best interest.

$300 huh. I know that I am naive because I would have overpaid to remove the bad review.
Posted by Michael Ward at 8:27 PM 1 comment: 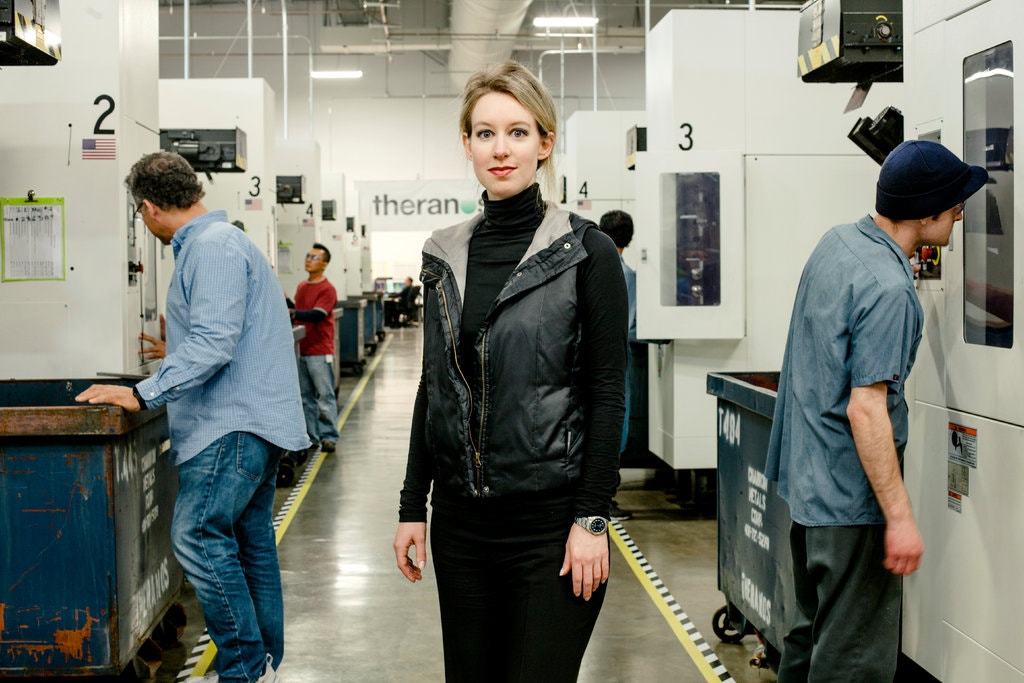 Our chapter on adverse selection uses IPOs as an example where sellers are more informed than buyers and so there is an opportunity for adverse selection and, perhaps, misinformation. But rarely does it blow up as big is being reported for Theranos.


The concept was irresistible: Theranos said it could take a few drops of blood from a simple finger prick to detect everything from H.I.V. to a diabetic’s A1C level. Relying on a proprietary technology to analyze the small quantities of blood, the private company offered a wide array of tests much more cheaply than existing blood tests.


Would that it had worked. Instead, the tests never were able to prove to work as advertised. It appears that the founder, Elizabeth Holmes, was able to fool the likes of George P. Schultz, Henry Kissinger, and Jim Mattis.


In addition to misleading investors about the promise of the company, federal officials charged the two with encouraging patients and doctors to use the company’s blood tests in spite of knowing they “were likely to contain inaccurate and unreliable results.”

My students will find this amusing

6. Teens are protesting in-class presentations.  ““Nobody should be forced to do something that makes them uncomfortable,” says Ula, a 14-year-old in eighth grade, who, like all students quoted, asked to be referred to only by her first name.”

Email ThisBlogThis!Share to TwitterShare to FacebookShare to Pinterest
Labels: Humor

If, as Chapter 9 suggests, more dangerous jobs pay more to compensate workers for the added danger, then this kind of correlation offers one explanation for the wage gap between men and women.
Posted by Luke Froeb at 9:36 AM 1 comment: Short videos on Demand/Supply and Elasticity

Short Microeconomics Videos from MarginalRevolution U.

Elasticity and Its Applications
The Price System
Price Ceilings and Price Floors
Posted by Luke Froeb at 2:36 PM 1 comment:

The bill is designed to force large employers to pay back, in the form of a new tax, federal assistance their workers receive.


"If you're an employer with a job applicant who you fear is going to draw public benefits, whether you're right or wrong, you may try and avoid hiring that person," Bernstein said.

Where the working class can NOT afford to live 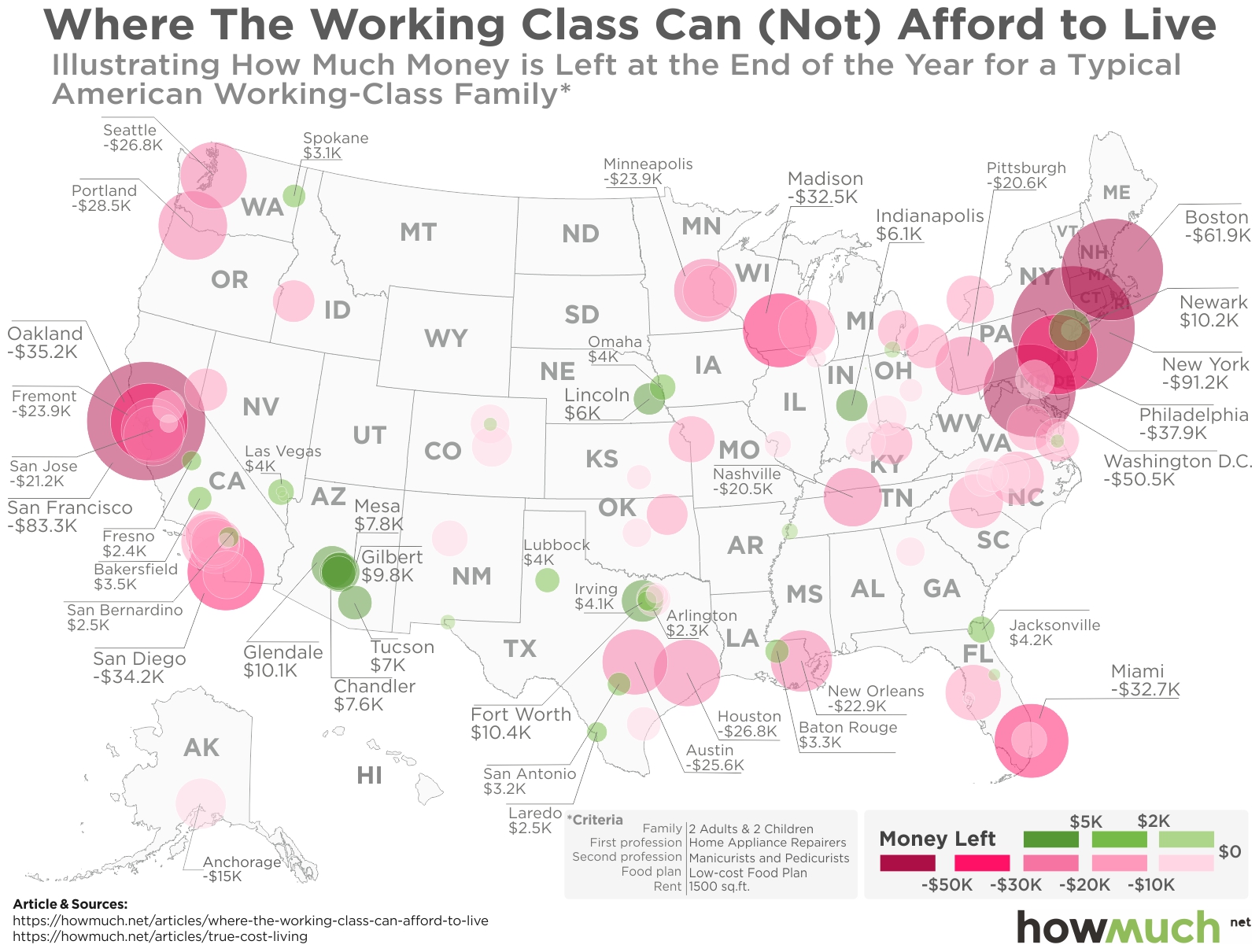 There is a lot of recent rhetoric about socialism and class conflict (see NY Times on The New Socialists).  Housing is one reason so many young people are so disaffected (article behind the grim map above).
Posted by Luke Froeb at 12:15 PM 6 comments:

FEB 1. International trade is zero-sum, has negative effects. ...This belief may take many forms. For instance, trade is said to create unemployment at home because foreigners instead of locals are making the things we need (Wood 2002, pp. 53–55). ...

FEB 5. Markets have a negative social impact ...The belief is that markets as such produce negative outcomes for most participants. ...

FEB 6. The profit motive is detrimental to general welfare. ...One version of this belief is that there is a special class of “excessive” profit that differs from the regular or fair allocation of profit to businesses (Wood 2002, pp. 10–12). ... Contra Adam Smith, the notion that private self-regard creates general welfare seems to be unintuitive (Rubin 2003).

FEB 7. Labor is the source of value. ... It is also present in opinions on the unfairness of low wages for hard or unpleasant jobs, especially those involving hard physical labor.

FEB 8. Price-regulation has the intended effects. ...For example, in the United States, many cities imposed rent-control in the 1960s – and such measures were a major item in politicians’ platforms (Dreier 1999, p. 211) – with the goal of creating an ample supply of cheap housing;
Posted by Luke Froeb at 4:14 PM 7 comments: