Is soaking the rich a viable strategy?

Make the rules or your rivals will: legal cartels in Nashville

It seems as if Nashville's high end limo companies want the government to eliminate competition from lower-priced competitors:

Until 2010, sedan and independent limo services were an affordable alternative to taxicabs. A trip to the airport only cost $25. But in June 2010, the Metropolitan County Council passed a series of anti-competitive regulations requested by the Tennessee Livery Association—a trade group formed by expensive limousine companies. These regulations force sedan and independent limo companies to increase their fares to $45 minimum.

Posted by Luke Froeb at 2:58 PM No comments:

One of the coolest things on the web, and something that every health care researcher should know about is the Dartmouth Atlas of Health Care. The current map shows us that 48% of the chronically ill patients in Las Vegas saw 10 or more different physicians in the last six months of life; while less than 17% in Alaska did.

what is supply-sensitive care and why is it important? It is care whose frequency of use is not determined by well-articulated medical theory, much less by scientific evidence. supply-sensitive services include physician visits, diagnostic tests, hospitalizations and admissions to intensive care among patients with chronic illnesses. Finally, as dartmouth atlas Project research hasdemonstrated, the use of supply-sensitive care varies widely across the u.s. and is overused in many regions. this is where roemer’s law comes into play – the most important determinant of this variation is the area’s supply of hospital beds, physician specialists, etc. where there isgreater capacity, more care is delivered – whether or not it is warranted

Posted by Luke Froeb at 4:20 PM No comments:

Surest sign yet that Greek debt holders will take a "haircut"

Normally, longer term bonds trade a higher interest rates than shorter term bonds because the investors must be compensated for bearing the extra risk.  But the so called "yield curve" for Greek debt is inverted. From Calculated Risk:


The yield on Greece ten year bonds jumped to 14.5% today and the two year yield is now up to 20.3%. The curve is inverted because investors expect to wake up one morning and own longer maturity debt at lower rates. This possibility hits the price of the 2 year bond more than the 10 year.

In other words, the two year interest rates are above the ten year rates because investors have to be compensated for bearing the bigger risk of a haircut on the two year notes.
Posted by Luke Froeb at 12:25 PM No comments:

Anatomy of a pipeline break 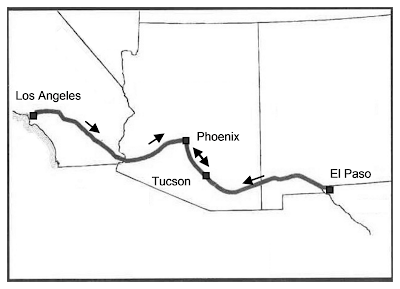 On July 30, 2003, the Tucson-to-Phoenix section of the gasoline pipeline from El Paso ruptured, until August 23, when partial service resumed.  In the graph above, it is easy to explain the increase in price in Phoenix (thick line) using supply-demand analysis:  supply of gasoline to Phoenix decreased, which resulted in a higher price.  It is even easy to explain the price increase in Los Angeles, several hundred miles away:  the increase in demand from Phoenix increased the opportunity cost of supplying gas to Los Angeles.  Recall that an increase in cost is represented as a decrease in supply to Los Angeles, which increased the price. 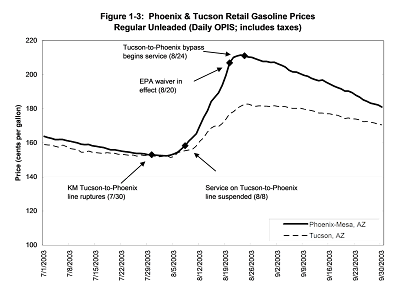 What is more difficult to understand is why the price in Tuscon increased.  A simple analysis would suggest that the pipeline break would mean an increase in supply to Tuscon, reducing the price in Tuscon.
What this analysis misses is the ability of "tank wagons" to transport gasoline from Tuscon to Phoenix.  In fact, they lined up for hours at the "rack" in Tuscon, waiting to fill their tanks with gasoline to deliver to Phoenix.  But since the rack in Tuscon was running at capacity, every time a tank wagon drove to Phoenix  this reduced supply of gasoline to Tuscon, increasing the price.
Posted by Luke Froeb at 9:56 AM No comments:

The trouble with average costs as a performance indicator

There are two types of coal from the Southern Powder River Basin in Wyoming: 8800 BTU coal, and 8400 BTU coal. The 8800 and 8400 numbers refer to the amount of energy contained in one pound of coal. The coal is delivered by rail and barge to power plants that crush it, burn it, and use the heat to create steam that drives generators that produce electricity.

However, when a plant manager at a coal-burning power plant made the switch from 8800 to 8400, his power plant was "de-rated," which means that its electrical output fell by 5%. The conveyor belts and crushers were already working at capacity, so he could not put a bigger volume of coal through the plant.  This forced his parent company to replace the lost electricity with higher-cost natural gas, which was even more expensive than producing electricity with 8800 coal.

The reason that the plant manager made the mistake was due to his balanced scorecard performance evaluation metric which included the average cost of electricity that he produced.

This story illustrates several ideas in the book:

Preston McAfee is an unusual economist in that he has passed a market test: Yahoo is willing to pay him for his advice. His latest advice is on the design of auctions for graphical displays on web pages. Yahoo runs billions of these automated auctions every day, through their Right Media Exchange (RMX).  Advertisers can bid for certain kinds of customers, and can pay for impressions, clicks, or sales.

To choose the highest-valued bidder, Yahoo develops predictors of how many clicks and sales result from each impression. For example, if one click occurs for every ten impressions, an advertiser would have to bid more than 10 times as high for a click as for an impression in order to win the auction.

Yahoo was very proud of its predictors, but was puzzled that they systematically over-predicted the actual number of clicks or sales after the auctions closed. A well-trained economist would recognize this as an example of the winners' curse:

In a standard auction context, the winner’s curse states that the bidder who over-estimates the value of an item is more likely to win the bidding, and thus that the winner will typically be a bidder who over-estimated the value of the item, even if every bidder estimates in an unbiased fashion. The winner’s curse arises because the auction selects in a biased manner, favoring high estimates. In the advertising setting, however, it is not the bidders who are over-estimating the value. Instead, the auction will tend to favor the bidder whose click probability is overestimated, even if the click probability was estimated in an unbiased fashion.


As with the winner's curse, there is a simple fix--bid as if your estimate is the highest among all the bidders. This requires shading your predictors downwards, based on the variance of the prediction.

The paper also details two other features that Yahoo uses to make their auctions more efficient: randomized bidding, used when a less-informed bidder bids against a more-informed one; and sometimes the auction is not won by the highest bidder, due to the value of learning. When a bidder has a novel or unusual use for the display, sometimes Yahoo lets the novel user win so that Yahoo can learn more about the value of the use. If Yahoo learns that the novel use of the display is more valuable than they thought, then they can earn enough in the future to more than compensate them for giving up some revenue earlier on.
Posted by Luke Froeb at 5:11 PM 8 comments:

Email ThisBlogThis!Share to TwitterShare to FacebookShare to Pinterest
Labels: 18. Auctions

We may constitute only 5 percent of the world's population, but we consume fully a third of the planet's coffee. This nation runs off coffee, most all of it from a sketchy continent. Should we be cut off by one of these sources, for our caffeine fix we'd be forced to drink Coca-Cola for breakfast as well as 10 other times a day.

Somehow congress is not exorcised about this important issue and I have not seen admonitions to "Drink American."
Posted by Michael Ward at 10:53 AM 1 comment:

Economic Modeling is for More Than Just Counting Cow Chips

Paper on how our book teaches economics to business students

Teaching Managerial Economics with Problems Instead of Models

Abstract:
In this chapter, we address the problems of teaching microeconomic principles to business students. We describe the peculiar features of student demand that make teaching economics using a model-based pedagogy unsuccessful. We conclude that a problem-solving pedagogy is a better way to satisfy student demand for business education.

Email ThisBlogThis!Share to TwitterShare to FacebookShare to Pinterest
Labels: teaching

There is no such thing as a water shortage

Eventually, they begin to get the idea that shortages are caused by an absence of trade, between those who have assets, and those who are willing to pay more for them, but are somehow prevented from doing so. Preventing this trade is what causes shortages.

Here is a good example of this: how development of a water market ended the "shortage" of water.

Entrepreneurs are made, not born

The power of arithmetic

“I am a progressive Democrat who’s broke,” from Andrew Cuomo in a NY Times profile
Posted by Luke Froeb at 11:40 AM No comments:

Paul Ryan makes "Republican" more than a punch line to some derogatory joke:

He does this without, on net, raising taxes. By closing loopholes, he would pay for a cut in the top personal and corporate rates. So how does he shrink the deficit? Through an eye-watering assault on entitlement spending, in particular health care. Mr Obama’s health care reform would be ditched, Medicaid would be converted to block grants, and traditional Medicare would be replaced with vouchers.

In Arizona, 25.5% of residents were obese as of 2009, according to figures from the federal Centers for Disease Control and Prevention, ranking it about in the middle among states. About 46% of Arizona's Medicaid enrollees smoke daily, according to a 2006 survey by the state's Medicaid agency.

My only question, do they think a $50 surcharge is big enough to change behavior?
Posted by Luke Froeb at 6:15 PM 1 comment: