Most significant economic research of 2018

Good article summarizing results from 10 papers. Here is the one that speaks to Chapter 19, Adverse Selection:


Main finding: Restricting employers from asking about their criminal history can lead to more discrimination based on race.
Posted by Luke Froeb at 9:29 PM 2 comments:

For a few years now, economists have been debating whether we are in a Bitcoin bubble. That its value has fallen to one-sixth its peak value about a year ago suggests the bubble has burst. However, that it still trades at five times its value two years ago indicates that it is not completely worthless. 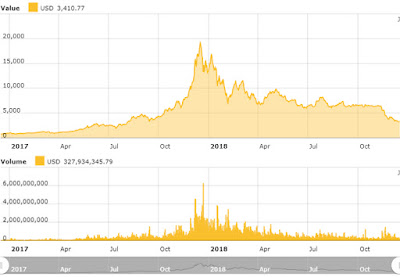 My monetary theory friends remind us that all fiat currencies are bubbles. They will become worthless eventually, it is just a matter of speed. Bitcoin, and other crytocurrencies, have the advantage of blockchain technology for secure, anonymous transactions and so some form of cryptocurrencies are likely to survive for the long haul. This feature makes it a favorite of libertarians who are now bristling at Bitcoin being called "Beanie Babies for Libertarians."

The WSJ reports that the US DOJ is "mulling over" repealing many rules governing how movies are distributed. The so-called Paramount decision of 1948 severely restricted movie studios' ability contract over how movies would be displayed. In the intervening 70 years, this decision has been the subject of much scrutiny by economists. As related in Hanssen's (2010) examination of how vertical integration facilitated consumer benefit enhancing length-of-run decisions:


The passage of time has not been kind to the economic arguments underlying the Paramount decision. Kenney and Klein (1983) and Hanssen (2000) provide efficiency rationales for block booking. De Vany and Eckert (1991) and Orbach and Einav (2007) discuss how minimum ticket prices reduced monitoring costs. De Vany and Eckert (1991) argue that the system of runs, clearances, and zoning served to provide low-cost access to large numbers of filmgoers.


Granted, these and other studies resulting from the decision greatly enhanced our understanding of when vertical foreclosure might harm consumers. However, I am not sure this somewhat esoteric knowledge has been worth 70 years of inefficiency, lost consumer surplus, and diminished producer profit.

Meeting in the Middle