Are the Golden State Warriors committing the "best practices" fallacy?

The New York Times Magazine has a good article on how a venture capital firm took over the Golden State Warriors and turned a $450Million investment into $2B enterprise.

While reading the article I couldn't shake the feeling that the article, and the GS organization, were falling victim to the “best practices” fallacy:  that you adopt a practice that leads to an outcome, and you mistakenly infer causality.  It could be, but I am enough of a skeptic to remain unconvinced.
Posted by Luke Froeb at 2:07 AM 15 comments:

Sherwin-Williams announced that it intends to acquire rival Valspar in a $9.3 dollar deal. What do the markets think of the deal? The stock market price of the target, Valspar, increased by 19.44 points (23.19%) on the news. 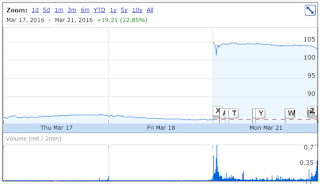 The stock market price of the acquirer, Sherwin-Williams, however, fell 14.59 points (5.37%) at the same time. 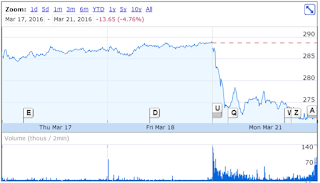 But because Sherwin-Williams has more shares outstanding, comparisons made from these amounts are not quite right. Multiplying price changes by the number of shares yields an increase in value of $1.538 billion for Valspar and a decrease of $1.345 billion for Sherwin-Williams. On net, shareholder value rose. The markets think assets would be moved to higher valued uses.
Posted by Michael Ward at 8:50 PM 3 comments:

Inequality is far lower than believed, and ... 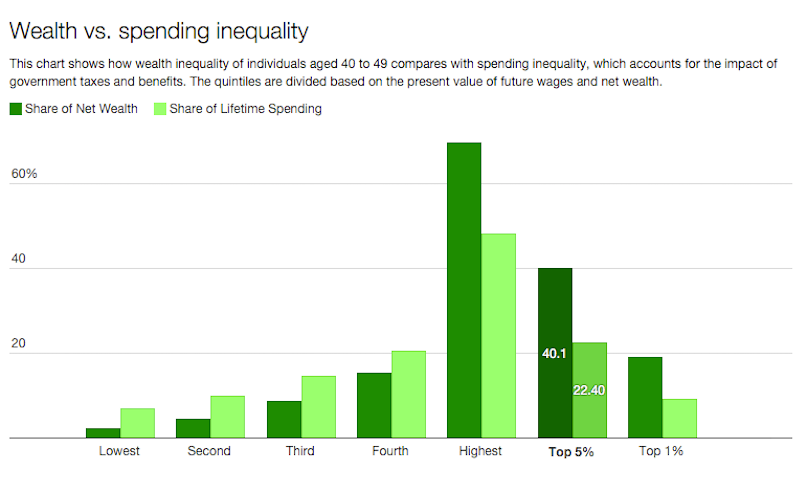 There are two big problems with common measures of inequality: lifetime, vs. current and income vs. spending.

1.   LIFETIME VS. CURRENT: Suppose that young people earn very little, and old people earn a lot. If you take look at the distribution of income you will conclude that it is really unequal. SOLUTION: measure income over a lifetime.

A recent article does just that, "We have been measuring inequality wrong,"


The facts revealed in our study should change views. Inequality, properly measured, is extremely high, but is far lower than generally believed. The reason is that our fiscal system, properly measured, is highly progressive. And, via our high marginal taxes, we are providing significant incentives to Americans to work less and earn less than they might otherwise.

Finally, traditional static measures of inequality, fiscal progressivity and work disincentives that a) focus on immediate incomes and net taxes rather than lifetime spending and lifetime net taxes and b) lump the old together with the young create highly distorted pictures of all three issues.

HT: Marginal Revolution
Posted by Luke Froeb at 9:10 AM 11 comments:

Why are Uber drivers more efficient than taxi drivers?

Email ThisBlogThis!Share to TwitterShare to FacebookShare to Pinterest
Labels: 01. Introduction: What this book is about, 02: The One Lesson of Business, 12. More realistic and complex pricing

Why do organizations fail?

Good review article that summarizes empirical and case studies that tell us why problems occur:


and what we can do to solve them (buy the book!):


Ask three questions:
1.  Who is making the bad decision?;
2.  do they have enough information to make a good decision?; and
3.  the incentive to do so?

Americana: money and banking.
Note, the earlier post about the reduction in demand for investment and the increase in supply of savings, suggest that the Fed may not be able to control real interest rates.

Bernie is not a socialist; and the US is not capitalist

Good review article on capitalism vs. socialism in the Atlantic.  Bottom line:

Thus, if capitalism is defined as an economic system characterized by the maximum possible separation of the private sector and the government, and easy taxes and regulation, the United States does not have a strictly capitalist economy. In fact, economic freedom in America has been declining so precipitously that, to quote Hessen again, “the United States, [which was] once the citadel of capitalism, is [now] a ‘mixed economy’ in which government bestows favors and imposes restrictions with no clear or consistent principles in mind.”

Taylor Force was a student at Owen, tragically killed in Israel this week.  Our thoughts and prayers go out to his family, friends, and classmates.  Thank you Taylor, for your contributions to our Vanderbilt community and country.  We will miss you.
Posted by Luke Froeb at 4:31 PM 7 comments:

Here is what I take away from this summary:


Giving money to someone living on $1,000 per year in the developing world will do far more to improve their lives than giving $1,000 to someone earning $25,000. The correlations above suggest that it’s about 25 times more valuable. If you want to help people, this is a major reason to focus on international poverty rather than helping the relatively poor in richer countries.

Email ThisBlogThis!Share to TwitterShare to FacebookShare to Pinterest
Labels: 04: Extent (how much) Decisions

Why do educated people earn more?

Two answers: education signals your inherent quality vs. education increases your productivity
Posted by Luke Froeb at 10:59 AM 14 comments:

I recently came across these short videos on various economics topics. I have not seen them all and have some quibbles about the ones I have seen, but over all they seem pretty good at an introductory level. Here is the one on monopolies.

... in that both harm consumers.  Steven Landsburgh's famous essay from The Armchair Economist:

Driving through northwest Washington, D.C., I remarked on the opulence that is so conspicuous in that quarter of the city. My friend Jim Kahn, in the passenger seat, wondered how such great wealth could have accumulated in a city that is notorious for producing almost nothing of value. I was too quick with the obvious cynical response: Most of it is the moral equivalent of stolen, partly through direct taxation and largely through political contributions that constitute the collection arm of a vast protection racket.

But Jim was quicker than I and saw that according to economic theory, my explanation was not cynical enough. In the presence of competition between the parties, all of those ill-gotten gains should be used to buy votes. If the Republicans are in power, pocketing $100 billion per year, then the Democrats can offer to duplicate Republican policies exactly plus give away another billion per year to key constituents. Unchallenged, this strategy would enable them to buy the next election, pocketing a net $99 billion. But the Republicans would counter by offering to give away an extra $2 billion and settle for $98 billion for themselves. Our experience with competitive markets tells us that there is no end to this bidding war until all excessive profits are competed out of existence.

When an industry is dominated by two highly profitable firms, theory tells us that if there is no price war then there is probably collusion. In the case of the Republicans and Democrats, the requisite collusion is on display for all to see. It is called bipartisanship.

Adam Smith observed that "people of the same trade seldom meet together, even for merriment and diversion, but the conversation ends in a conspiracy against the public, or in some contrivance to raise prices." That truth is the basis for the antitrust legislation that attempts to prevent such conspiracies and contrivances from getting off the ground. When the president of United runs into the president of American at a picnic, he is forbidden by law to say "I will not undercut you on the Chicago-to-Los Angeles route provided that you do not undercut me on New York-to-Denver." Yet we allow Republican leaders to greet Democrats with offers like, "I will support housing aid to your urban constituents if you will support agricultural programs for the farmers in my district.”


I propose that all political compromise—indeed, all discussion between candidates, officeholders, or officials of competing parties—be fully subject to the same provisions of the Clayton and Sherman Antitrust acts that regulate the activities of every private business in America. I predict that political antitrust legislation will confer on voters the same benefits that economic antitrust legislation confers on consumers. Once the wealth of northwest Washington is depleted by the resulting political price wars, politicians might be forced to compete by offering more efficient government.
Posted by Luke Froeb at 2:44 PM 4 comments: