Currently, those infected with COVID-19 can infect others a week before they know they are infectious. Suppose they knew a few days earlier. They could isolate themselves before they infect too many others. Current tests are too expensive, take too long to process, and are too few for this to work. But now recent emergency authorization will allowed Abbot Labs to supply a $5, 15 minute test. Abbott plans to produce 50 million per month, more than double the capacity of current tests.

This test has a higher false positive rate, requires a larger virus load, and is only approved for symptomatic cases. This last requirement is likely to be relaxed (or flaunted). This test is likely to be used as a screen.

Kristian Andersen, an infectious-disease researcher at Scripps Research, noted that Abbott developed an app to go along with the test that would provide proof that a person had recently tested negative. To Andersen, this is clear evidence that “Abott didn’t just have symptomatic diagnostics in mind here, but also screening of asymptomatic people.” 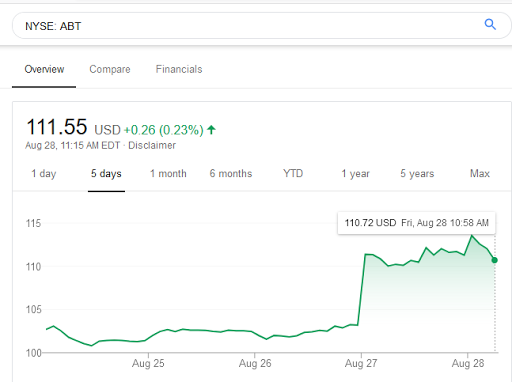 Fashion as a Sunk Cost

Marketplace has a recent story on excess retail inventory. Due to the pandemic,  people are not shopping for the latest apparel in nearly the expected numbers. This inventory represents a fixed and sunk cost with low opportunity cost. Options include:

Because manufacturers have more information about the viability of their products than do retailers, retailers may be susceptible to hold-up. One way they protect themselves is to write contracts that keep them off the hook.

Lauren Beitelspacher, who teaches marketing at Babson College, said department stores, for instance, will often negotiate terms about excess inventory in their contracts with suppliers. These contracts mandate that you will give me advertising money, you will allow me to discount it or you’ll take the inventory back, she said.


Most recently, Uber and Lyft, based in San Francisco, announced they would close their California operations after a court ordered them to reclassify drivers as employees [under new law AB5]. They’re still running at the moment, having secured a last-minute stay, pending appeal, but ultimately, unless that appeal proves fruitful or the law changes, they say they’re pulling out. ...

And you should believe them, though AB5’s architect, Democratic Assemblywoman Lorena Gonzalez of San Diego, seems to think they’ll blink if she just shows enough steely will. “These are billion-dollar companies who are publicly traded,” she told a local television station. “They have enough money to treat their employees correctly.”

The pandemic has shifted the game, however. Now that Uber and Lyft are losing money, unemployment is high (so drivers dont have as many options), and public transport is suddenly very risky, it seems likely that Uber and Lyft will exit unless the State folds:

It was doubtful they could ever have stayed in California with AB5 in effect, but until the coronavirus is conquered, the thing is clearly impossible.


Lets see how well economics can predict this outcome of this bargaining game. 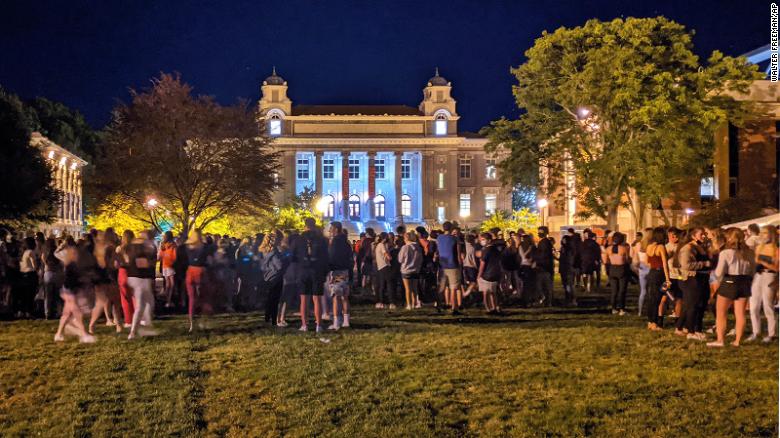 Syracuse University suspended students who attended a party where social distancing was not practiced.

...Vice Chancellor for Strategic Initiatives and Innovation J. Michael Haynie said the gathering of first-year students "may have done damage enough to shut down campus, including residence halls and in-person learning, before the academic semester even begins."

Deterrence works best if the punishment is swift and sure, and linked closely to the crime.  Publicizing the policy ahead of time (I don't know whether Syracuse did this), and making it very clear that the expected costs of punishment are big, may raise the costs of partying above its benefits.  However, since only 23 out of what looks like a very large gathering were suspended, the expected costs of punishment (the probability of getting caught times the cost of suspension) seem too low to deter partying.

Mug maxim:  Anticipate self-interested behavior, lest you be victimized by it.

Wall St. is finally listening to what economists have been saying for years, that economic profit is a better way to motivate employees.  Not only does it make visible the hidden cost of capital by including a charge for the capital being used, but it also can measure the performance of individual business units.

With better performance evaluation metrics it is easier to align the incentives of employees with the profitability goals of an organization.  In particular, it "tells" employees that using capital has a cost, which makes it less likely that they commit the "hidden cost fallacy."

"Whatever compensation scheme you have, that's exactly what your employees are going to respond to," says Daniel Rinkenberger, CFO of Kaiser Aluminum Corp., KALU +0.47% which has used economic profit to decide short-term incentives for key employees since 2006. "It's driving them to do things our shareholders want, like not having excess assets in the pool. It drives people to be more efficient in how they have inventory deployed."

PepsiCo's new focus on economic profit will lower its capital spending to about 4.5% of sales this year, down from an historical average of about 5.5%, says Mr. Johnston, because employees are making better decisions. The company also has been able to cut the sums of money it has tied up in accounts receivable and inventory, boosting cash flow.


This story ties into several of the themes in the book:

From Foundation for Economic Education:

On Friday, Uber and Lyft may exit California, which will leave hundreds of thousands of drivers unemployed and millions of Californians chasing more expensive cabs. ...

By requiring ride-sharing apps such as Uber and Lyft to reclassify their drivers as full employees, the law mandated that the companies provide healthcare and benefits to all the drivers in their system and pay additional taxes. ...

Legislators didn’t realize the drastic implications their legislation would have...

UPDATE FROM TODAY's WSJ:  Lyft just suspended service in California.  Uber estimates show why:  it would raise fares and lose a lot of work if the California rules go into place.   Note:  Demand for Uber and Lyft has already collapsed due to the virus.  Now California is kicking them.

Would you be willing to install a device to track your driving behavior if it could save you on auto insurance? A paper by Yizhou Jen and Shoshana Vasserman finds that not many people are, but those that do install the device reveal a lot about information asymmetries, adverse selection, and moral hazard.

First, the authors find evidence of adverse selection: "Safer drivers are more likely to opt in, even holding financial risk and rewards fixed." Thus, insurance companies give discounts for agreeing to the tracking device because only safer drivers would agree to install it.

As discussed in the book, the answer to "is this information problem an example of adverse selection or of moral hazard" is usually "both." This relates to a similar study discussed in a previous post.

from Garr Reynolds.  My favorite is

Your presentation is for the benefit of the audience. But boring an audience with bullet point after bullet point is of little benefit to them. Which brings us to the issue of text. The best slides may have no text at all. This may sound insane given the dependency of text slides today, but the best PowerPoint slides will be virtually meaningless with out the narration (that is you). ... 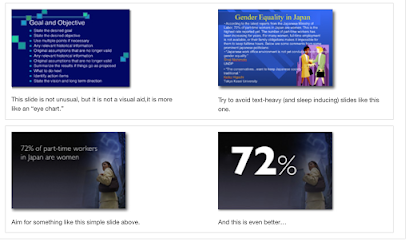 Is the 10% dollar depreciation good or bad?

Project Syndicate reports that the depreciation helps US producers (but hurts US consumers):

In the US, meanwhile, the dollar’s depreciation has been welcomed as an overwhelmingly positive development for the economy, at least in the short term. After all, economic textbooks tell us that a weakening dollar boosts US producers’ international and domestic competitiveness relative to foreign competitors, makes the country more attractive for foreign investors and tourism (in price terms), and increases the dollar value of revenue earned overseas by home-based companies. That is also all good for US stock and corporate bond markets, which benefit further from the greater attractiveness of dollar-denominated securities when priced in a foreign currency.

...but it hurts foreign producers (but helps foreign consumers):

But the reaction has been less welcoming in the other advanced economies. Japan and eurozone member states, in particular, fear that currency appreciation could threaten their own economic recovery from the COVID-19 shock.

Of course, it also depends on what caused the depreciation, i.e., it could be that a third factor is like a decline in US interest rates is causing the dollar depreciation, and you have to take account of that as well.  But even if you can figure that out, there is the additional complication that every producer is also a consumer, so the answering the good or bad question is complicated.

Jack Stubbs has an interesting Twitter thread on negotiations after a ransomware attack. It was also picked up by Reuters. Its seemed very professional. They initially demanded $10 million but settled for $4.5 million, pretty close to the midpoint between disagreement values.

Why are Gold, Stocks, and Bonds appreciating?

DISCLAIMER:  If I really knew, I wouldn't be teaching school!

The Bloomberg Dollar(BBDXY) tracks the performance of a basket of 10 leading global currencies versus the U.S. dollar.  The above represents a decline in the price of a dollar (as it cannot buy fewer foreign currencies)

ZeroHedge says that it is because the dollar is depreciating. As the dollar loses value (relative to other currencies), people shift money out of dollars into assets that (hopefully) won't lose value as the dollar declines. This increases demand for these assets which raises their price.

Of course, one has to beware confusing correlation with causation:  just because the prices move in opposite directions does not mean that one is causing the other to move.  There could be a third factor that is causing both movements.
Posted by Luke Froeb at 9:21 AM 3 comments:

Amni Rusli has a longish piece, "Supply Chain Resilience," dissecting much of what we know about how current global value chains are being affected by the US trade wars and by the Covid-19 pandemic. It deals with relative labor costs, automation, sufficient human capital, risk, and politics. One tidbit:

Resilience is not only about reliability but also about redundancy and the ability to rebalance load away from stressed supply chains. This is too big a task on a local level but it is easier to carry out with large global networks of supply system. Consequently, this will create strong incentives for incumbents to consolidate.

These ideas are only touched on at various places in the text, but are not explicit. Diseconomies of scale and scope often lead to outsourcing some aspects of production. Sourcing it abroad implies some exchange rate risk. Quality assurance from suppliers often requires some relationship specific investments.
HT: Marginal Revolution
Posted by Michael Ward at 3:38 PM 3 comments:

Jim Halpert from "The Office" discovers that he has met his annual commission cap. Any additional sales yield zero commissions. Gabe from corporate tries to rationalize the new policy.
Posted by Michael Ward at 10:47 AM 3 comments: