A working paper from the National Bureau of Economic Research finds that ageing is the main cause: nearly 2m baby-boomers who tried early retirement over the past three years have taken a liking to it and arenot coming back.
UPDATE:  MSAs with stronger house price growth tend to have lower [labor] participation rates, but only for home owners around retirement age — a 65 year old home owner’s unconditional participation rate of 44.8% falls to 43.9% if he experiences a 10% excess house price growth. A counterfactual shows that if housing returns in 2021 would have been equal to 2019 returns, there would have been no decline in the labor force participation of older Americans.
Interpetation: working is unpleasant and if your wealth (measured by house price) increases enough, older workers would rather not.
Posted by Luke Froeb at 1:31 PM No comments:

Curiously, the price series (below) is much more slowly moving than the Activity series.  And for the last three pricing cycles since 1968, it appears that the cycles are lengthening.

Estimating the costs of pollution with natural experiments

Price of acquiring a company has just fallen

Should we re-regulate Airlines or stop reading the NY Times?

Turns out that inflation-adjusted airfares were 60 percent lower in 2020 than in 1980. Indeed, flying is no longer a luxury. It’s cheap enough to allow most Americans to fly — by 2020, 87 percent of the U.S. population had taken a commercial airline trip. And low fares have cost us nothing in terms of safety: no major airline has been involved in an accident in the United States since 2009.   ...

What about service reliability? Suppose policymakers force an airline that cancels a flight to immediately provide a cash reimbursement to all affected passengers – as the European Union requires in many circumstances. All airlines, not just Southwest, scratch thousands of flights every year, sometimes due to human or equipment error — but mostly because of bad weather. If airlines are forced to incur all the financial risks of delayed flights, something else must give — back to amenities and/or fares.

It's almost as if the NY Times editors have never read Chapter 3: the opportunity cost of regulation that imposes costs on an airline is increased prices or reduced service.
HT:  MarginalRevolution.com
Posted by Luke Froeb at 11:33 AM 1 comment:

The theory is right out of chapter 1: voluntary transactions create wealth because they move goods and services to higher-valued uses.  In a kinship society (no first-cousin marriage bans), there are fewer people with whom to transact, and this means that income is lower.

Incomes are growing, and inequality is falling

Real incomes are growing and progressive taxes (which tax the rich at higher rates) and transfer payments (from richer to poorer) are responsible.  (From The Economist) 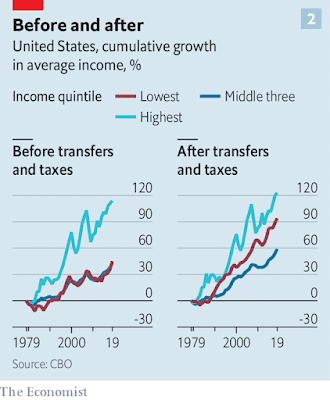 How do we create incentives for firms to train employees?

...with noncompete clauses. For example, if a firm trains an employee to code using Salesforce, the employee gains a valuable skill that they can take to another firm. Employers anticipate such opportunism and use a variety of contractual provisions, like noncompetes, to guard against it.
Unfortunately the FTC just voted to ban noncompetes.
As Commissioner Wilson notes in her dissent, though FTC pays lip service to the diminished incentive to train employees:

“there is evidence that non-compete clauses increase employee training and other forms of investment,”

they dismiss its importance.
This is a time-honored political tactic--when banning a practice, ignore its benefits and tout its costs--but it sets a bad precedent and undermines Agency credibility.
Posted by Luke Froeb at 8:53 PM No comments:

...[Pay Transparency law] shrank the gender pay gap by 13%, but only because it curbed the wages of male employees. Studies of Britain’s gender-pay-gap law, which was implemented in 2018, have reached similar conclusions.

Of course, the term "gender-pay-gap" refers to a statistical difference betweden what men and women are paid. It does not mean that men are paid more for the same work as women. See earlier post When are between group differences evidence of discrimination?
Posted by Luke Froeb at 4:05 PM No comments: