Both have restrictive zoning that drives up prices which leads to calls for more affordable housing, which results in further restrictions on supply, or vouchers that increase demand, both of which further drive up prices.

A surprisingly clear report from California noted much the same:


“Many housing programs — vouchers, rent control and inclusionary housing — attempt to make housing more affordable without increasing the overall supply,” the report said. “This approach does very little to address the underlying cause of California’s high housing costs: a housing shortage.”


So, why does this happen?  Reason blames self interested home owners, renters in rent-controlled apartments, and the politicians who kowtow to them at the expense of largely poor people who cannot get subsidies and would-be homeowners:


Homeowners have a strong economic incentive to restrict supply because it supports price appreciation of their own homes. It’s understandable. Many of them have put the bulk of their net worth into their homes and they don’t want to lose that. So they engage in NIMBYism under the name of preservationism or environmentalism, even though denying in-fill development here creates pressures for sprawl elsewhere. They do this through hundreds of politically powerful neighborhood groups throughout San Francisco like the Telegraph Hill Dwellers.

Then the rent-controlled tenants care far more about eviction protections than increasing supply. That’s because their most vulnerable constituents are paying rents that are so far below market-rate, that only an ungodly amount of construction could possibly help them. Plus, that construction wouldn’t happen fast enough — especially for elderly tenants.

Why are Chinese bond yields rising? 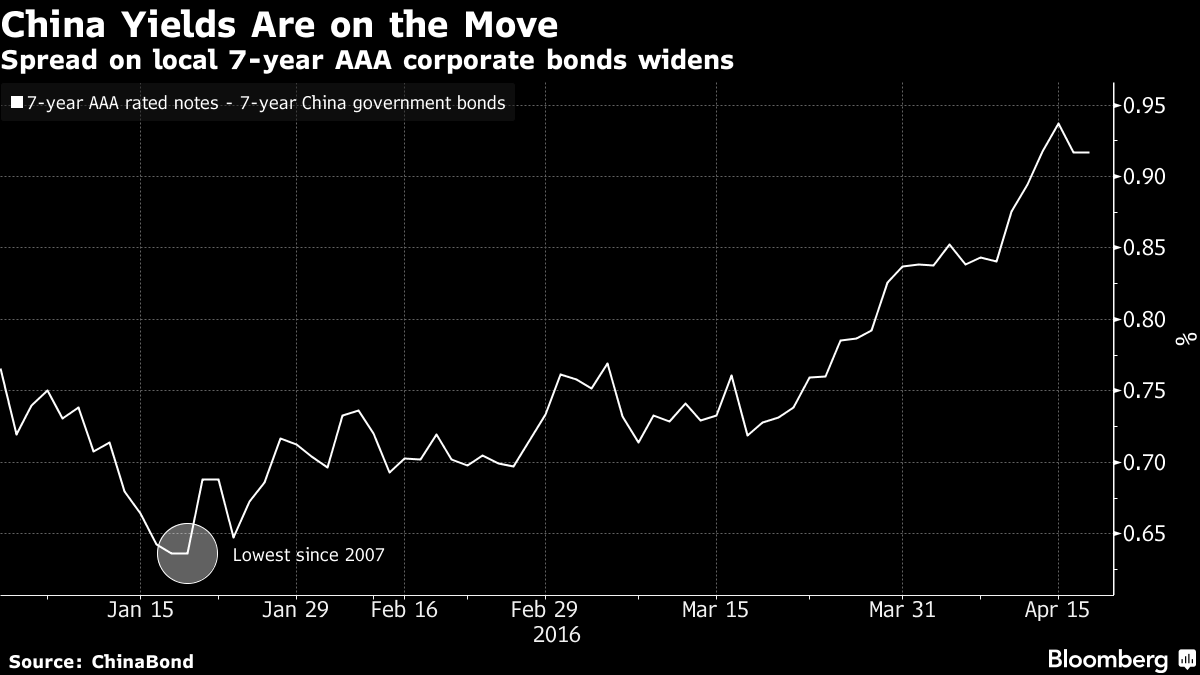 From Bloomberg:
Spooked by a fresh wave of defaults at state-owned enterprises, investors in China’s yuan-denominated company notes have driven up yields for nine of the past 10 days and triggered the biggest selloff in onshore junk debt since 2014. Local issuers have canceled 61.9 billion yuan ($9.6 billion) of bond sales in April alone, and Standard & Poor’s is cutting its assessment of Chinese firms at a pace unseen since 2003.
Remember that an increasing yield means a declining price, which represents a decrease in demand, as inestors (lenders) demand higher return to compensate them for the higher risk.
HT:  MarginalRevolution.com
Posted by Luke Froeb at 9:14 AM 257 comments:

Is Iran free riding on OPEC?

Mr. Novak explained that the 11 OPEC states and seven outsiders present during the meeting had spent two months drafting an agreement that would cap oil production at January levels in an effort to stabilize oil prices, and it was all undone by the fact that Saudi Arabia, Qatar, UAE, and "predominantly other Gulf States" insisted that Iran be included in the deal (Iran did not attend the talks).

I have been warning about under-funded US state and city pensions since the first edition of our textbook.  The latest warning tells us to look for bankruptcies in 5-10 years:


The Stanford study found that the states of Illinois, Arizona, Ohio and Nevada, and the cities of Chicago, Dallas, Houston and El Paso have the largest pension holes compared with their own revenues.

In order to deal with the large funding shortfall, many cities and states will have to increase their contributions to their pension funds, either by raising taxes or cutting spending on vital services.


Hank Kim, executive director at the National Conference on Public Employee Retirement Systems, a trade association for public pension plans in the US, called Mr Rauh’s study a “manipulation of arithmetic” and “The [public pension] plans are in good shape and are headed to being in even better shape,” he said.

I  hope that the economists who study this problem won't quit writing about it.  But I suspect they are feeling a little like Cassandra who was given the gift of prophecy by Apollo, but because she rebuffed his advances, she was also cursed so that no one would believe her.
.
Posted by Luke Froeb at 11:58 AM 6 comments:

Why have re-admission rates fallen? (answers)

Based on comments to our earlier post about re-admission rates falling, I think I know know the answer:

1.  re-defining "admission" as "observation": Many Medicare patients are placed under “observation status’’ when they arrive at a hospital. That means they are considered outpatients and are not formally admitted, even if they are given a bed.  As a result, “the ratio of observation use to inpatient stays per 1,000 beneficiaries increased by 94 percent.” (link here)


"...we created a triage clinic--essentially a "walk-in" clinic for our patient population to be seen with any urgent issue after discharge. This has cut down on both ED visits and re-admissions."

Email ThisBlogThis!Share to TwitterShare to FacebookShare to Pinterest
Labels: 04: Extent (how much) Decisions, 21: Getting employees to work in the firm’s best interests

Why has the European political left fallen on such hard times?


Elected in 2012 on the slogan “time for change”, he promised to curb austerity and reboot the economy. But a 75% tax rate on the rich was dropped after bringing in paltry receipts. The rest of the euro zone insisted that deficit limits which had previously been ignored now had to be taken seriously. With markets breathing down his neck, unable to devalue and spooked by the prospect of France being lumped in with the EU’s struggling south, Mr Hollande cut business taxes and made savings in the budget.


Bottom line:  markets punish politicians much more quickly and effectively than voters ever will.
Posted by Luke Froeb at 5:56 AM 7 comments:

Why have re-admission rates fallen?

The Affordable Care Act ("Obama care") began imposing penalties, and it seems as if hospitals have responded.  Mother Jones is skeptical about the results, as this would represent an almost perfect response to the ACA penalties:


the chart is almost too perfect. For four years the readmission rate is dead stable. Then, in a single month between December 2010 and January 2011 it suddenly drops by a full percentage point, and continues dropping for two years. This decline started about eight months after the passage of Obamacare, and it's hard to believe that hospitals could react that quickly.

Then, the very instant that penalties begin for high readmission rates, everything stabilizes again. Apparently America's hospitals unanimously decided that once they'd hit a certain level, that was good enough and they wouldn't bother trying to improve even more.

I can think of several explanations, e.g., it may be that:

I would love to hear from former students (pls post in comment section) as to what they think is causing the change.
Posted by Luke Froeb at 4:28 AM 17 comments:

Email ThisBlogThis!Share to TwitterShare to FacebookShare to Pinterest
Labels: 04: Extent (how much) Decisions, 21: Getting employees to work in the firm’s best interests
Newer Posts Older Posts Home
Subscribe to: Posts (Atom)