Hope for would-be home owners and renters from California!

The State of California is consider a measure that would loosen zoning restrictions near "transit rich" areas, like subway stops.


The impact could be huge. A Times analysis found that about 190,000 parcels in L.A. neighborhoods zoned for single-family homes are located in the “transit rich” areas identified in SB 827. Residences in those neighborhoods could eventually be replaced with buildings ranging from 45 to 85 feet, city officials say.

Increasing housing supply would not only reduce price and help would-be home-owners and renters, but it would also reduce our collective carbon footprint because California, with its mild climate, is one of the "greenest" places to live.
Posted by Luke Froeb at 9:26 AM 2 comments: 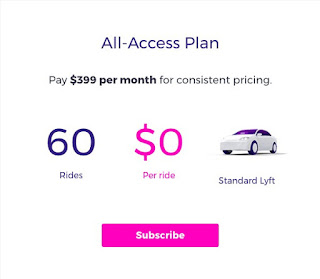 Lyft is experimenting with monthly subscriptions for rides. There is a $15 limit on how much each ride is worth, but for high volume users, this is a deal. This might convince some people to forego owning a car.

Even better, Lyft is trying out different plans: 60 rides for $399 per month versus 30 rides for $199 per month. I suspect their data analysts will pore over the data to see how to taylor offerings.

This is the likely result from allowing more efficient retailers into Texas. A Texas law has prohibited publicly traded firms from selling liquor.

Walmart sued to challenge that rule, and on Wednesday a federal district judge sided with the retail giant.


The law was specifically written as a barrier to entry to protect mom & pop stores.


The law was created in the early 1990s when the Texas Alcoholic Beverage Commission, or TABC, lost a lawsuit from an out-of-state package store liquor license applicant. The rule forbids publicly traded businesses from selling alcohol to protect family-owned companies.


So, since the legislature could not prohibit only out-of-staters, they simply prohibited all publicly held firms. Naked protectionism.
Posted by Michael Ward at 11:51 AM 1 comment:

The steel and aluminum tariffs just announced represent a barrier to entry for foreign firms. On the up-side, they are claimed to generate 19,000 steel worker jobs.* On the down-side, steel costs will go up. By how much? A naïve estimate would multiply the 25% tariff by $70.6 billion in US steel sales to yield $17.6 billion in additional annual costs. This yields just short of $1 million per steel industry job generated. But steel workers earn about $52,000 per year, not bad but no where near $1 million. A more precise price estimate would take into account the types of steel affected, stimulation of US production, and the reduction in quantity demanded. A more precise estimate could cut this estimate in half or perhaps more, but is still likely to be many multiples of a steel worker's salary. The tariff will move assets from a high valued use to a lower valued use.

*Among the job losses caused by this tariff, it is claimed that there would be 45,000 lost auto jobs and 30,000 lost construction jobs. The costs of these losses should be added to the half million.
Posted by Michael Ward at 11:51 AM 2 comments:

Email ThisBlogThis!Share to TwitterShare to FacebookShare to Pinterest
Labels: 02: The One Lesson of Business, 10. Strategy-the quest to slow profit erosion

When Does a Show Turn a Profit?

Slate recently reported that Amazon Prime's streaming numbers do not look so good ("Amazon Prime’s Streaming Numbers Are Out, and They’re Surprisingly Underwhelming"). But, as they point out, this is not so easy to figure out. One of the goals, perhaps the primary goal, of Amazon's foray into producing TV shows is "customer acquisition" for Amazon Prime's online shopping offerings.


A source informed Reuters that Amazon evaluates shows based on the number of times that show was the first thing viewed by a Prime subscriber after signing up. “The company then calculates how expensive the viewer was to acquire by dividing the show’s costs by the number of first streams it had,” the report explains. “The lower that figure, the better.” Unfortunately, a number of beloved Amazon shows sport high costs per first stream.


This is just one metric because shows now can generate ad revenue too ("Amazon Prime Video free with ads? Not quite"). But it highlights what is most important to Amazon. And it seems to be driving production decisions.


While The Man in the High Castle, for instance, had one of the lowest costs per first stream after its first season, $63, that number jumped up to a whopping $829 following the production of Season Two. Mozart in the Jungle season two, despite having one of the studio’s lowest budgets at $37 million, cost $581 per first stream. Feminist cult favorite Good Girls Revolt was singled out as the highest cost per stream: $1,560 against its $81 million season one budget. The show got the axe after one season and just 1.6 million viewers.


Another inference is that Amazon considers the online shopping to have higher margins. It was willing to set low margins for TV streaming so as to shift out the demand for the complementary product, online shopping. Not too different from bars offering free peanuts to patrons in order to sell more beer.
Posted by Michael Ward at 1:48 PM 4 comments: