Why are Russians withdrawing money from banks?

In Russian cities, anxious customers started lining up on Sunday in front of A.T.M.s, hoping to withdraw the money they had deposited in banks, fearful it would run out. The panic spread on Monday.

...On Monday it plunged further, with the value of a single ruble dropping to less than 1 cent at one point. As the value of any currency drops, more people will want to get rid of it by exchanging it for one that is not losing value — and that, in turn, causes its value to drop further.

In Russia today, as the purchasing power of the ruble drops sharply, consumers who hold it are finding that they can buy less with their money. In real terms, they become poorer. Such economic instability could stoke popular unhappiness and even unrest.

From software developers working for US clients: ﻿

Hello team, now I am in a save place in the mountains near the Poland. As --- mentioned I have laptop not so strong to use it for development. Tomorrow I will try to buy it in Mukachevo city and will try to return to the work. Network is poor, but I think I will have ability to work.
A few words about war: russians are very bad peoples especially from Chechnya. They stopped a car and killed a family with 2 children’s we know this family they killed all of them, children’s 3-5 years old….. Family want to move from Kiev today. I took my child, wife and my mother and we fill safe. My father and sister couldn’t move from Kiev. They are on the front line with enemy. We have a contact with them. Hope they will be alive.
Also tomorrow I will go and give my blood for our army.
Please if you have time: share the information about Russians invaders in different channels. We need to stop them. This is terrible!!! lovely and pleasure capital of Ukraine Kiev was bombed all night. Millions of people are staying at home. It is a disaster!!!!!
Be safe and pray for Ukraine.
Best regards, -----

The costs of equity and equality

...pay transparency causes significant increases in both the equity and equality of pay, and significant and sizeable reductions in the link between pay and individually measured performance.

Why do women earn more than men in Pakistan?

Tim Harford ("The Undercover Economist") suggests that it is due to selection bias:

...in a country where the barriers to paid work for women are high, the few women who do have jobs at multinational companies are outstandingly good. These high‑flyers are promoted and paid more than the average man. This suggests that there are women outside the workforce who, if they did have paid jobs, would be well above average even if they weren’t superstars. If the barriers to their workforce participation could be lowered, they would raise the productivity of the companies that employed them.

Bottom line: Inefficiency implies opportunity for those with the imagination and initiative to exploit it.
Posted by Luke Froeb at 4:28 PM 6 comments:

Email ThisBlogThis!Share to TwitterShare to FacebookShare to Pinterest
Labels: 02: The One Lesson of Business, 17. Making decisions with uncertainty

Why did Airbnb succeed?

Interesting story from Wharton that illustrates a number of ideas from the book.

Airbnb was born in 2007, when two broke designers were trying to make rent on their San Francisco Apartment.  When a design conference came to town, and hotels were sold out or charging surge prices, they bought some air mattresses put them on their floor, and rented them to conference attendees.

Obviously, the space on the apartment floor was more valuable to the conference attendees than it was to the two designers [Ch 2].
At the time, there were other home-sharing sites, like VRBO and Homeaway.com.  But these were for vacation rentals.  Airbnb was uniquely urban.  Every time a conference came to town, demand for lodging would spike, and hotels would raise rates [Ch 12, "revenue management"].  Airbnb made money by sending some of this demand to apartment owners and renters.
The still-private company has grown rapidly and reached a valuation of $31B.  As a result, the hotel price spikes have gotten smaller, called "compression" in industry jargon, because Airbnb supply is drawn into the market during these increases in demand [Ch 8].
Posted by Luke Froeb at 1:57 PM 1 comment:

Email ThisBlogThis!Share to TwitterShare to FacebookShare to Pinterest
Labels: 02: The One Lesson of Business, 08: Understanding Market and Industry Changes, 10. Strategy-the quest to slow profit erosion

Can you distinguish correlation from causality?

"Everyone who confuses correlation with causation eventually ends up dead."--Emily Rauscher
HT:  Nico
Posted by Luke Froeb at 4:53 PM 8 comments:


When I was a long-haired, first-year econ grad student and TA/labor organizer (AFL/CIO #3220), on strike and pissing away my education, I picked up Republican Party Reptile at the University Bookstore and never put it down.  I had no idea that other people thought the same way.

About ten years ago, I invited PJ to speak at Vanderbilt and had the pleasure of introducing him to my students. Thank you PJ.

A new PLos One study by Lisa Powell and Julien Lader, compared beverage consumption in Seattle and Portland after Seattle, but not Portland, instituted a "sugar tax" on soda. They found a 7% increase in beer consumption in Seattle relative to Portland. They estimate the cross-price elasticity to be 0.35. The tax was meant to cut the medical costs of obesity due to excess sugar intake. The social costs to additional beer drinking may be even higher. Not only is beer calorie rich, people tend to function less well while inebriated, leading to various injuries. Below are the raw trends in beer sales. 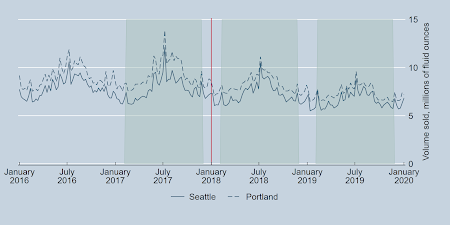 From a managerial perspective, beer distributors who anticipated the substitution would have increased production enough to maximize profits from this shift in demand.