Is the stock market over-valued?

FT has a nice summary, with graphs. 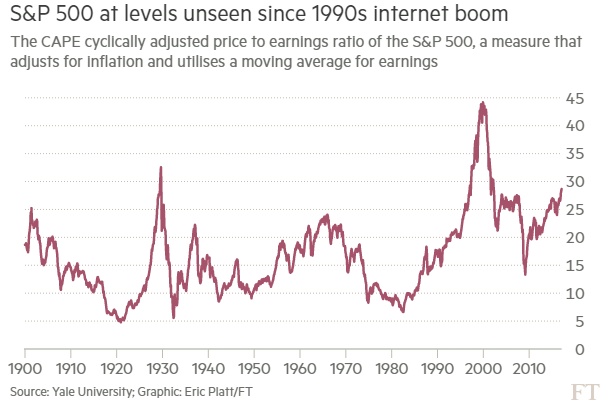 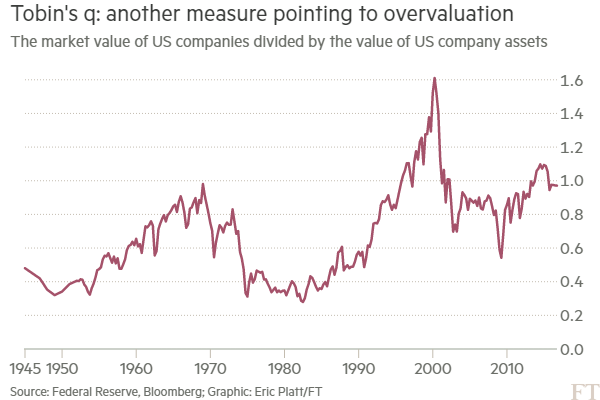 This CNBC report on  Lockheed-Martin plant producing the F-35 reports on the declining cost per fighter over time. The two sources are cost savings from increased automation and from learning curves. The more you buy the more you save.

Email ThisBlogThis!Share to TwitterShare to FacebookShare to Pinterest
Labels: 07: Economies of Scale and Scope


BOTTOM LINE:  Trade helped U.S. skilled workers (by increasing demand for their services) and consumers (by giving consumers cheaper goods), but hurt U.S. unskilled workers (by reducing demand for their services).  In a frictionless world, they would move to their next best alternative (e.g., Texas or Tennessee), but instead they are moved out of the labor force and into the safety net (e.g., medicare, medicaid, early retirement, disability insurance, food stamps, and TANF).

I think the other thing that we have to recognize, and that economists have tended not to emphasize is that jobs aren’t purely income. They are part of identity. They structure people’s lives. They give them a purpose and a social community and a sense of relevance in the world. And I think that is a lot of the frustration that we see in manufacturing-intensive areas. We saw a lot of that actually in the recent election. People feel like their place in the universe, or at least in the economy, has really been kind of reduced, made less valuable. And I think that that’s costly even beyond the direct financial costs.

Email ThisBlogThis!Share to TwitterShare to FacebookShare to Pinterest
Labels: 02: The One Lesson of Business, 09. Long-run equilibrium, 11. Supply and demand: Trade bubbles market making

Recent article by some middling economists who show that following mergers among hotels, occupancy goes up.  They identify two theoretical mechanisms that could explain the result:

ZeroHedge has a post on the effects of Philadelphia's HUGE soda tax (50% on the receipt to the right) which has lead to layoffs within Philly, but only a small reduction in soda consumption, as residents have started buying soda outside the city limits.

Former student John Tamny has a critique of Keynesian Economics with reference to the Rio Olympics.

The Boston Globe takes on the zero-sum fallacy by essentially praising inequality:


To begin with, all eight men earned their extraordinary wealth. Through ingenuity, talent, and immense effort, they created enterprises that provide hundreds of millions, even billions, of human beings with goods and services that make life better, healthier, safer, and more affordable.

Moreover, the Oxfam Eight didn’t grow their fortunes by preventing other people from growing theirs. Their wealth may equal that of half the people on Earth (though Oxfam’s methodology is dubious), but the world’s poor have been climbing out of poverty at the fastest rate in human history. Byanyima rightly bewails the fact that “1 in 10 people survive on less than $2 a day” — what she omits is that over the past 30 years, the number of people living in such extreme poverty has fallen by nearly 75 percent. Johan Norberg, writing in Spiked Review, provides hard numbers: Worldwide, an average of 138,000 people climb out of extreme poverty every day. Since 1990, the world’s population has grown by more than 2 billion, yet the ranks of those in extreme poverty has shrunk by more than 1.25 billion.

Amazon's focus on growing market share with low prices has benefited consumers but given it a big share of the online market.
Despite its low income, investors have bid up its stock price in anticipation that its size will eventually pay off:

How to keep diplomats from defecting to the West

This appears to be a problem for North Korea. The solution to this pesky moral hazard problem is to force diplomats to "post a bond" in the form of offerring a hostage.

Thae said there was one big obstacle to his defection.

Thae Yong-ho: All North Korean diplomats are forced to leave one of their children back in Pyongyang as a hostage.

Bill Whitaker: As a hostage?

His break came when that policy unexpectedly changed and Thae’s oldest son was allowed to join the family in London. They all agreed to defect. He would not give us the details about his escape and who helped. But we know he was kept in a safe house by South Korean intelligence agents and questioned for more than three months. He said it was too dangerous for us to meet his family.


But if you are going to do it, you must do it continuously.

Suggested by Helen Gorman
Posted by Michael Ward at 11:14 AM 1 comment:

Who monitors the monitors?

In our problem solving framework we ask three simple questions to diagnose goal misalignment:
Answers to these three questions will isolate the source of the problem and suggests one of three generic solutions:
The first solution is always tempting, but you have to make sure that whoever makes the decision has goals aligned with those of the organization, i.e., enough formation to make a good decision, and the incentive to do so.  This is sometimes referred to as the problem of "who watches the watcher?"

The economist has an article on the history of this problem:


In business and finance, this is known as the “principal-agent” problem. Shareholders employ managers to run a company; investors use fund managers to look after their savings. That makes sense. It allows us to take advantage of the expertise of others, and of economies of scale in fund management (it costs little more to look after $10m than $1m). But it is extremely hard to align the interests of principals and agents exactly.


To spoil the ending, the solution is always "it depends."
Posted by Luke Froeb at 6:17 PM 1 comment:

Cost disease in education and health

Fabulous post on why costs have gone up so much in education and healthcare without a corresponding increase in education or health.

The two graphs describe the problem:

The question an economist would ask is simple:

So, imagine you’re a poor person. White, minority, whatever. Which would you prefer?

We ask the same question:


Do you think the average poor or middle-class person would rather:

Why three point shots are the best in basketball

Basketball coach Dan D'Antoni uses expected value per attempt to explain why his team takes so many 3-point shots:


"If you can get a layup and it's clean — it's not one that's highly contested — it's [worth] 1.8 points [per attempt]. It's 1.3 from that corner, 1.27. Do you know what a post-up is, with a guy standing over top of you? It's 0.78. So you run your team down there and we'll see how long you can stay with teams that can play the other way. You've seen it in the NBA. The last two championships have been Cleveland and Golden State. What do they do? You don't see anybody post up. They just spread that thing out and go."

The trickiest trade in the world is ...

Calstrs, the second biggest pension fund in the world, just admitted that it is reducing its target rate of return (also its discount rate) from 7.5% to 7.0%.  The increase in savings is split between the teachers and the State of California, the employer of the teachers.