Supply and Demand for Space Travel

Growing up seeing the NASA Apollo missions, it was easy for me to believe that I would see rockets  flying all over the solar system. Despite the triumphs of the Shuttle, ISS, and Mars rovers, the next 40 years did not quite live up to expectations. But the last 10 did. For forty years, the costs barely budged but they have fallen one hundredfold since 2010! See this cool info-graphic on truly revolutionary changes in costs. 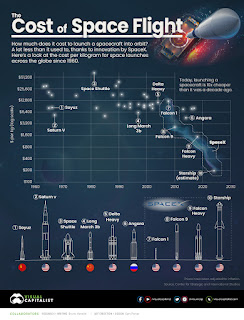 When costs fall that much, we move way down on the demand curve. Once costly ventures such as colonies on the Moon, manned missions to Mars, and mining asteroids start to become feasible. Is this a one time drop in costs or will they continue to fall as more is learned?  My ten year-old self is giddy again.

Email ThisBlogThis!Share to TwitterShare to FacebookShare to Pinterest
Labels: 07: Economies of Scale and Scope, 08: Understanding Market and Industry Changes