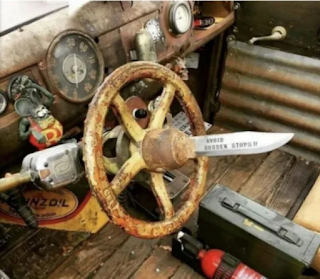 Over 40 years ago, Sam Peltzman studied the behavioral changes from the 1968 adoption of a mandatory seat belt law. Before then, seat belts were an option that many new car owners had forgone (like the original owner of my first car, a 1964 VW bug). Engineers had estimated thousands of lives would have been saved had crash victims only been restrained. Their estimates were high. They had not accounted for the additional crashes. Once drivers were safer given a crash, they could drive a little faster and a little more recklessly and still be just as safe as without the seat belt. The net effect of more drivers surviving crashes, but more of them, was a smaller reduction in auto fatalities than had been predicted.

Peltzman's findings were controversial at the time but spawned a slew of research into how safety regulations affect behavior. The story goes that at one presentation, Walter Oi noted that car crashes also cause negative externalities. That is, often you crash into someone else causing harm to them as well as to yourself. The usual remedy for negative externalities is to make the reckless behavior more expensive, not less. Oi suggested that instead of seat belts, we should include a sharp spike on the steering column. The possibility of impaling oneself on "The Peltzman Spike" would focus the mind on avoiding crashes.