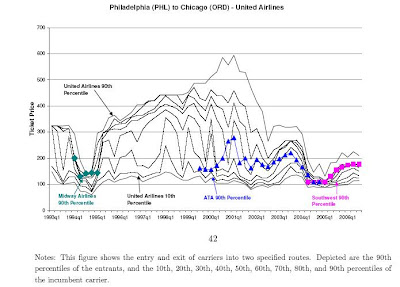 Nice article by two economists from the Boston Fed shows that when Midway Air (green dots) and later Southwest Air (chartreuse dots) entered the Philly<-->Chicago route, United Airlines price dispersion collapsed. Mostly the highest fares came down to close to the lowest.  This is consistent with the theory that price discrimination cannot survive in a competitive market. Curiously, ATA entry (blue dots) had a much smaller effect on United prices than Midway or Southwest entry.