No institutions are seen as both competent and ethical 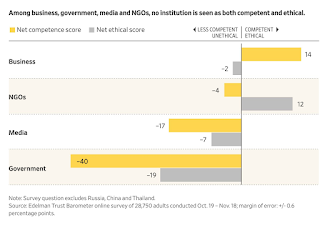 WSJ survey shows mistrust of all major institutions, but particularly Government.  Business seems to be responding.

When it comes to looming societal challenges, 92% of people said it was imperative for their employers’ CEOs to speak out on issues from the ethical use of technology to climate change, and three-fourths said they believed chief executives should be the drivers of change, rather than waiting for government intervention.

Some CEOs have picked up on this already. Lawrence Fink, chief executive of BlackRock Inc. has been outspoken on topics like slow wage growth and jobs lost to automation. His widely read annual letter to investors, released earlier this month, said that BlackRock would take a tougher stance against corporations that aren’t providing a full accounting of their environmental risks, part of a slew of moves by the investment giant to show it is doing more to address investment challenges posed by climate change. Days later Microsoft Corp. said it would take more carbon out of the air than its operations and those of its supply chain produce by 2030.