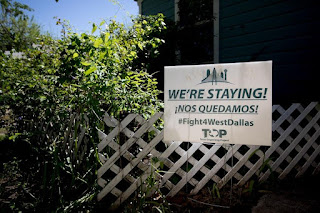 A heart-wrenching drama is being played out in West Dallas. The neighborhood is mostly full of 70+ year old homes rented to mostly poor folks. These were built before the neighborhood was even annexed by Dallas. For decades, the structures had been 'grandfathered in' from keeping up with the ever-improving building code. The area had been isolated from the city by the Trinity River until a landmark bridge opened a few years ago. That brought developers and new enforcement of housing codes. The houses are so out of code, that the owner, HMK Ltd., would rather shutter them:


“Not just impractical but it’s impossible. No matter how much money, you cannot throw enough money into these houses and make them compliant.”


Some of the tenets have been living in these homes for three or four decades and pay a paltry $300-$400 a month in rent. HMK has offered to sell them the houses they currently rent for $65,000, their next best offer. Fine if these poor folks could find the $65,000. The idea originally was that vertical integration by the occupant into ownership would evade the housing codes. But no, the city will require the new owners to bring them up to code.

Previously, the renters and landlord had been content exchanging low rent for poor quality homes. Everyone knew these were poor quality homes and were fine with that. But nanny-state enforcement of the housing code will soon keep this value creating transaction from being consummated.
Posted by Michael Ward at 11:46 AM

Email ThisBlogThis!Share to TwitterShare to FacebookShare to Pinterest
Labels: 02: The One Lesson of Business, 23. Managing vertical relationships