Did "Cash for Clunkers" work? 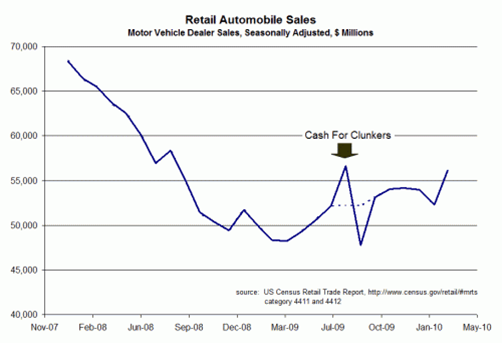 A new paper confirms what the graph below shows:

in 957 U.S. cities, the surge in automobile sales was short-lived while the program was in place. About 360,000 automobile purchases were induced in July and August 2009. Most of these purchases simply were brought forward by a few months: a sharp decline in sales after the program ended suggests that it had a muted total effect on auto purchases, the authors conclude.


One of the criticisms of Keynesian stimulus is that Keynes never told us what happens in his model when taxpayers must pay back the money that the government spent to stimulate the economy.  Famously, he said, "in the long run, we are all dead." (See this post for a discussion of Keynes).  So in essence, Keynesian stimulus borrows consumption from the future.